Mobile analytics firm AppSee reports that an iPad with model identifier "iPad6,8" and a resolution of 2,732×2,048 pixels -- likely the 12.9-inch "iPad Pro" -- has appeared within its analytics logs. The firm is also seeing the "iPhone8,1" and "iPhone8,2" in its logs, as others have, which are likely the model identifiers for the so-called "iPhone 6s" and "iPhone 6s Plus." 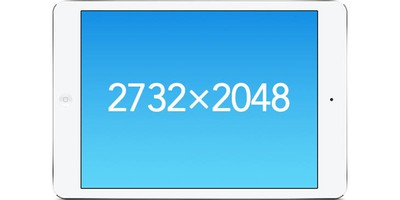 A few months ago, Taiwanese iOS developer Hiraku Wang shared iOS 9 beta code that suggested the 12.93-inch "iPad Pro" could have a 2,732×2,048 pixels resolution at 264 PPI based on Apple's @2x high-resolution modifier. Research firm DisplaySearch also reported in January that Apple had a tablet display with a resolution of 2,732×2,048 pixels and 265 PPI under development.

With new devices beginning to show up in analytics, it is likely that Apple is nearing the final stages of testing new iPhone and iPad models that are expected to be announced in the near future. Apple is rumored to hold a media event on September 9 to unveil the "iPhone 6s" and "iPhone 6s Plus," but it remains unclear if the "iPad Pro" will also be announced or held back until later in 2015 or early 2016.

KGI Securities analyst Ming-Chi Kuo issued a note to investors today that claims the "iPad Pro" will have a Force Touch-enabled stylus and enter mass production in September or October. Kuo expects that Force Touch will become a standard feature on all Apple products, similar to how Siri, Touch ID, Retina displays and other features were released on one device before expanding to others.

Didn't somebody great once say that we would never see a stylus?

Let's just be clear that back then he meant that you won't need a stylus in order to actually use the iPhone, you use your finger... Also a stylus will make a lot of sense for designer and artists, it's an iPad "Pro" for god's sake :D
Score: 13 Votes (Like | Disagree)

AngerDanger
Wasn't this resolution left in a bar a few weeks ago?

LewisChapman
Didn't somebody great once say that we would never see a stylus?
Score: 6 Votes (Like | Disagree)

I'm scared of any iPad with a higher resolution (no matter the size) because of getting burned so bad on the iPad 3. :(

Didn't somebody great once say that we would never see a stylus?

Yes, but more and more people are starting to realize how useful a stylus can be especially in illustration/drawing situations. I myself use the Surface 3 with a stylus in these situations and it seems very practical.

The stylus is not a requirement, but it's now a must have accessory if you want to take full advantage of a tablet. Steve Jobs was right in introducing a 'stylus-free' tablet with the iPad, and it worked...until more and more apps started to appear and the need for a stylus became more apparent.

Let's just be clear that back then he meant that you won't need a stylus in order to actually use the iPhone, you use your finger... Also a stylus will make a lot of sense for designer and artists, it's an iPad "Pro" for god's sake :D

This. I don't think some people understand what was meant by a 'stylus' back then.
Score: 3 Votes (Like | Disagree)
Read All Comments

Friday June 18, 2021 6:59 am PDT by Sami Fathi
Apple supplier TSMC is preparing to produce 3nm chips in the second half of 2022, and in the coming months, the supplier will begin production of 4nm chips, according to a new report from DigiTimes. Apple had previously booked the initial capacity of TSMC's 4nm chip production for future Macs and more recently ordered TSMC to begin production of the A15 chip for the upcoming iPhone 13,...
Read Full Article • 159 comments