Quartz yesterday published an article which analyzed data from Apple Music's Beats 1 radio station, in an attempt to get a feel for the station's most played songs and artists throughout the month of July. The company took data collected from 12,445 songs specifically from "early July to early August," and discovered that artists The Weeknd, Drake, and Disclosure were the top three most-played musicians for the month. 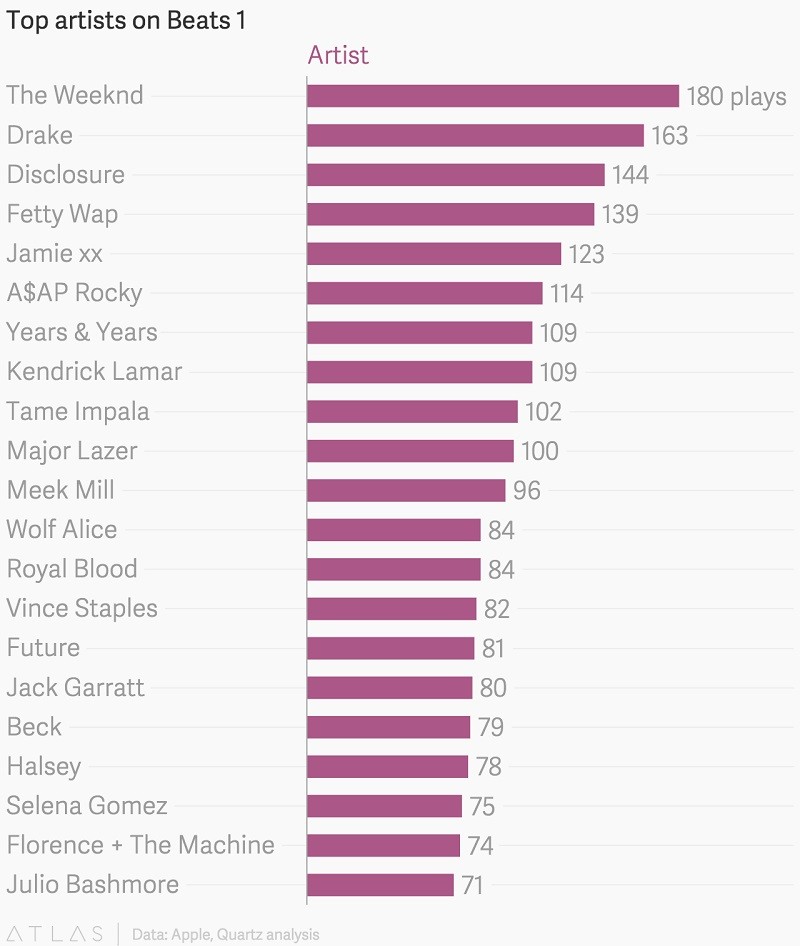 The Weeknd was also on top of the most played song chart, with the song "Can't Feel My Face" -- which he performed live at WWDC in June -- played a total of 107 times in July. Artists including Rachel Platten, Beck, and Selena Gomez, amongst others, round out the rest of the list thanks to the popularity of their current chart-topping songs "Fight Song," "Dreams," and "Good for You," respectively.

Beats 1 has something that is rare in the world of digital music: scarcity. Listeners can’t choose a song and play it over and over. (They can do that elsewhere on Apple Music.) But curation doesn’t mean songs aren’t repeated. We counted 12,445 tracks but only 3,371 unique songs, meaning each track was played an average of 3.7 times. Eighteen of the 20 songs in the table above were played over 50 times.

Quartz also found the top genre on Beats 1 to be hip-hop (1,726 plays), with alternative (1,506 plays) and electronic (802 plays) rounding out the top three spots. Still, "a quarter of the songs in the dataset" that Quartz measured were only played one time, so Beats 1 is still managing to present a few diverse tracks into the mix every once in a while. 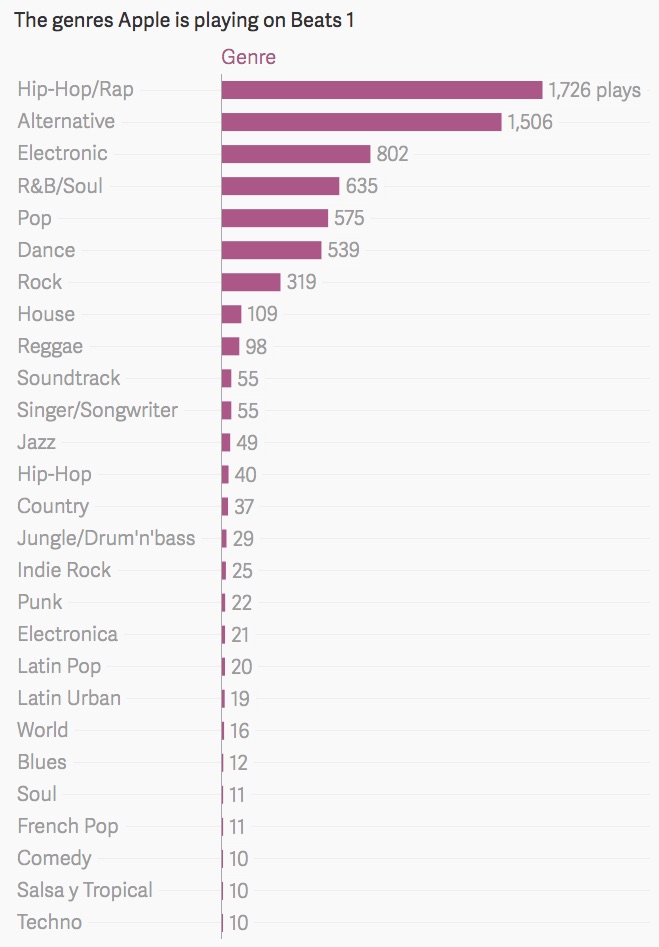 The response to Apple Music has been mixed, with the service's detractors pointing to the initial speed bumps syncing with iTunes and an over-reliance on specific musical genres in Beats 1, the latter of which Quartz has now detailed. The rest of Quartz's report on Beats 1 is definitely worth checking out, with charts analyzing the volume of songs played on weekdays versus the weekend and even one highlighting songs played most frequently in pairs.

brendu
I stopped listening to Beats 1 because I'm not into hip hop and that's all they ever play when I've tuned in. I prefer 'for you' because I'm always finding new things I really like.
Rating: 16 Votes

keysofanxiety
"We want to make a radio station just for music, not one specific genre like other stations"

There is classical music in AM, it is just not played on Beats 1. AM is more than just Beats 1.

Pretty much anything that isn't the current urban music.
Rating: 7 Votes

Who are all those people?

Scary, isn't it. On that list I know only the names of Drake, Selena Gomez and Florence and The Machine, and of those three, the only one whose music I've actually heard is Florence + The Machine. I might have heard Drake but not realized it.

Among the kids I know, they don't seem to actually enjoy hip-hop and rap but they will brag about listening to it because they think it makes them cool. I've heard a handful of rap singles I liked because there was a solid story in them. But everything else I've heard in passing is :confused:. And some of it is so misogynistic that I fear my mother's generation burned their bras in vain. So much nylon and cotton and polyester died for nothing. :(

However, the genres of music I'm interested in are just as easily made fun of and dismissed. Thank you, Blake Shelton, for the immortal refrain "chew tobacco, chew tobacco, spit!" :rolleyes: I'm sure he pulled that one from the depths of his soul. :p
Rating: 6 Votes

TheAppleFairy
On the entire list the only two "artist" I have ever heard of are Beck and Selena Gomez. Out of those two the only song I know is "Where it's at".
Rating: 6 Votes

DarkWinter
Surprised that Pharrell isn't on that list! :p

I have to admit that I was very impressed for the first couple of days when Beats 1 launched, but soon found that more or less the same songs and artists were repeated over and over after that.
Rating: 5 Votes

Daalseth
Interesting that Classical isn't on the Apple Music genre list anywhere.
Looking down the list I guess I'll not be signing up any time soon.
Rating: 5 Votes

navaira
Maybe a part of Beats takeover was that Apple have to "keep it real" and be "down with tha kidz"?

I have a displeasure of knowing most of the "artists" on this list, and by the looks of it, I haven't lost anything by ignoring Beats 1. If I want to listen to Currents or "Lean On", I've got them here at hand. The rest, Apple should pay me 9.90 a month to listen to, and I'd argue that's not enough.
Rating: 5 Votes

joueboy
Taylor Swift will be mad once she see this list. She might pull her entire album. S)
Rating: 5 Votes

spiffers
So the fatty with his balls in a pinch, squeeling during the keynote, actually got on a top list? Wow. Well, not that surprised, got fed up with Beats 1 after 20-30 minutes. They only play angry thugs talking fast 'bout blings, hoes and murder. If thats mucic, come over to my place, Ill kick you hard in the balls, and you get famous. (Coz now Ur gonna be mad, talk fast like hell, have a squeeky voice, and want to kill me, typical the prereqs for a rap tune)
Rating: 4 Votes
[ Read All Comments ]