We reported this morning that Apple Watch shipments had begun arriving at Apple Stores in the United States ahead of the imminent launch of in-store availability, and it now appears that in-stores sales of the Apple Watch will indeed begin tomorrow, on June 17.

It's now after 10:00 a.m. on June 17 in some parts of Australia, and Apple Stores in the country are now offering the Apple Watch in-store after a reservation is made for an in-store pick-up online. In the Australian online Apple Store, when selecting a watch, there's now an option that says "Interested in buying in-store?" with a link that allows buyers to check reservation availability. 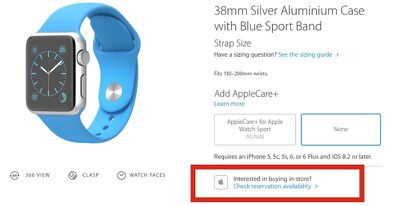 After choosing to select a reservation, there's a drop down menu that shows nearby Apple Stores, letting users see whether a particular Apple Watch is in stock. If a watch is in stock, the site displays a green checkmark and the next available reservation time. Making a reservation requires a phone number to be entered, allowing Apple to text a unique registration code that gives buyers 30 minutes to complete a reservation and schedule an in-store pick-up time.

Apple Watches that are not in stock are listed as unavailable for in-store pick-up, with Apple providing instructions to check stock levels again at 8:00 a.m. each morning, when inventory for the day is updated.

With the Apple Watch now available in-store in Australia, it's likely that all first wave launch countries will be seeing in-store sales starting as June 17 rolls around in each location. The reservation process will be the same as the process that's currently available in Australia, so potential Apple Watch buyers in the United States should check stock levels right at 6:00 a.m. local time. It's 1 a.m. in the U.K. and the online U.K. reservation page is live, suggesting we'll see the U.S. site up and running at around midnight on June 17. The U.K. site says that the first reservations will be available beginning at 6:00 in the morning.

Stock levels of each watch remain unclear, but in Australia many stores appear to have a mix of Sport and Stainless Steel Apple Watches available. Many of the more limited Apple Watches, including those in Space Gray and Space Black, are not currently available, nor are those with limited bands like the Modern Buckle and the Link Bracelet. It's likely that available stock in the United States will be similar.

Brandhouse
Benefit of living down here in Australia, we get the release of new products ahead of others.
Score: 12 Votes (Like | Disagree)

Benefit of living down here in Australia, we get the release of new products ahead of others.

I'm on Day 15, and I look forward to putting it on in the mornings, so I don't miss things.

Got mine about three weeks ago and I feel the same way. I feel sad if, for whatever reason, I have to take it off and leave it behind, and I look forward to putting it on every morning. Odd, I'm sure, as I imagine people seeing me through the day would think I hardly use the watch at all. But that's the thing about the watch. You use it differently than a phone or iPad, mainly because you can't lift your arm and stare at it for long stretches of time. It's for glances, not staring. You get a tap, see a message, maybe send a quick response...then go back to whatever you were doing. Ditto with most everything else. Check the time (glance), note reminders when they pop up (glance), incoming phone calls, etc.

I use to miss texts and calls a lot because my phone was in my bag and I didn't hear it, or I did and thought it was someone else's phone. The taps on the wrist make sure I don't miss texts or calls nearly so much. And I'm finding that most of the things I used to do on the phone, I now do on the watch, like check my shopping list, do quick calculations, pay for groceries/coffee; I like that it don't have to juggle it hand to hand as I often did the phone in a lot of those situations (and I'm not going to drop it like I sometimes dropped the phone).

As for phone calls...I think we've found the weakness in Dick Tracy. It's tiring lifting your arm for a long conversation :D But I did impress my father by showing off the watch's phone-call-making abilities to him. And it's certainly useful as it not only lets you know if you want to answer that call, but if you do, it keeps you from missing it. I sometimes missed calls as I tried to find my phone before it stopped ringing. And, no, it was never a tragedy when that happened...but it's nice to have it happen less.
Score: 8 Votes (Like | Disagree)

Most boring and useless Apple device. I'd get more excited about a new Magic Mouse.

Your judgement is superior, I shall now place the device I have been wearing for two months into the bin.
Score: 7 Votes (Like | Disagree)

JeffyTheQuik
Nice! I hope all of you waiting go get one!

It does take about 3-7 days to really appreciate the watch. I'm on Day 15, and I look forward to putting it on in the mornings, so I don't miss things.

Thursday September 29, 2022 12:38 pm PDT by Juli Clover
Tony Blevins, Apple's vice president of procurement, is set to depart the company after he made a crude comment about his profession in a recent TikTok video, reports Bloomberg. Blevins was in a video by TikTok creator Daniel Mac, who was doing a series on the jobs of people he spotted with expensive cars. After seeing Blevins in an expensive Mercedes-Benz SLR McLaren, Mac asked Blevins what ...
Read Full Article • 744 comments

Friday September 30, 2022 12:51 pm PDT by Juli Clover
Apple CEO Tim Cook has been touring Europe this week, sitting down for interviews with various media publications. Augmented reality has been a running theme in Cook's discussions, and it is a topic he brought up again in an interview with Dutch publication Bright, which is part of RTL News. "I think AR is a profound technology that will affect everything," Cook said, echoing comments from...
Read Full Article • 306 comments

Sunday October 2, 2022 6:41 am PDT by Joe Rossignol
Apple is developing new iPad Pro, Mac, and Apple TV models, and at least some of these products will be released in October, according to Bloomberg's Mark Gurman. However, Gurman continues to believe that Apple is unlikely to hold an event this month. In the latest edition of his Power On newsletter, Gurman said "the big iPhone 14 unveiling last month was probably it for Apple in 2022 in...
Read Full Article • 170 comments