Apple has announced that its fleet of vehicles collecting street-level mapping data in multiple countries will begin surveying France and Sweden throughout August. The vehicles will be driving through the Malmö and Stockholm metropolitan areas in Sweden and Île-de-France region of Paris, Hauts-de-Seine, Seine-Saint-Denis and Val-de-Marne in France. 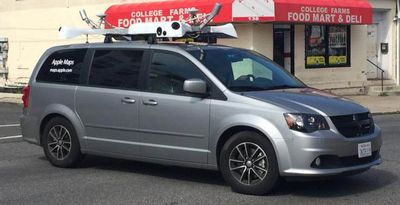 Apple confirmed in June that it is driving vehicles around the world to collect data to improve Apple Maps, and the mapping imagery is almost certainly being used to create a Google Maps "Street View" competitor. Apple Maps vehicles are also taking photos of businesses and storefronts in major metropolitan areas to replace current imagery provided by third-party sources such as Yelp.

Apple has posted a complete list of new areas in the United States, France, Ireland, Sweden and the United Kingdom it will be surveying throughout August on its Apple Maps vehicles website, including extended coverage of unmapped areas in California, Florida, Georgia, Hawaii, Louisiana, Massachusetts, Michigan, Missouri, Nevada, New Jersey, New York, Texas, Utah and Washington.

Every time I see this, I think to myself why?

What is the point?

I wasn't aware you could get Google street view with Apple maps.
Score: 8 Votes (Like | Disagree)

AngerDanger
So if you need to drive around with something ugly on your roof, stick an Apple Maps decal on your side window.

US, OK
But England, Ireland, France, and Sweden before Canada?
No iTunes Radio, ApplePay, Now Apple Maps.
Does Apple even know that Canada exists any more?

What's this Canada you speak of?
Score: 6 Votes (Like | Disagree)

Daalseth
US, OK
But England, Ireland, France, and Sweden before Canada?
No iTunes Radio, ApplePay, Now Apple Maps.
Does Apple even know that Canada exists any more?
Score: 5 Votes (Like | Disagree)

Piggie
Every time I see this, I think to myself why?

Every time I see this, I think to myself why?

What is the point?

The point is Google does not share this and if Apple wants to offer this feature, they have to do it themselves. It's really that simple.

BTW... saw my first Apple Map vehicle in NYC about a month ago. Can't wait to see one drive by my house out in the middle of nowhere! LOL!
Score: 3 Votes (Like | Disagree)
Read All Comments