Apple has quietly changed its App Store policies and is no longer permitting iOS devices running pre-release software to be used to write App Store reviews. When attempting to write a review from a device that has iOS 9 installed, a popup is displayed that tells users reviews can't be submitted while using beta software.

This is a much needed change that will prevent developers from having their App Store ratings and reviews affected by beta-related problems that are out of their control. As MacStories' Federico Vittici pointed out last week, negative App Store reviews left by beta testers have been an unaddressed issue for developers since Apple started providing beta software to public testers. 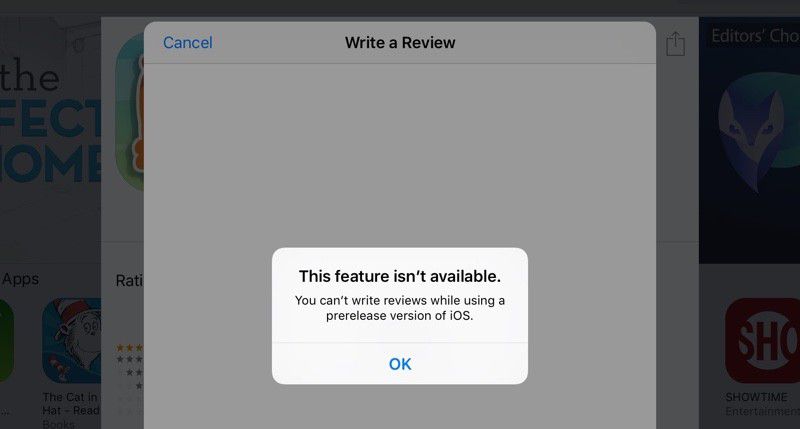 When beta software is released, some customers fault developers for apps that crash or do not function properly with beta features, leading them to leave negative App Store reviews even though there are months to go until apps need to be ready for the new software.

Following the release of the iOS 9 and OS X El Capitan public betas a week and a half ago, developers began seeing a huge uptick in negative reviews. Many of them took to Twitter to share 1 star reviews that included comments like "Broken with iOS 9.0," and it appears Apple finally took notice of the issue.

iOS 8.4.1, a pre-release iOS build that is available only to developers, continues to allow App Store reviews to be left, so it appears this may be a change that affects only major software updates or software updates that have also been seeded to the public as part of Apple's public beta testing program.

Chundles
This is great news. Beta users should not be able to leave star ratings or reviews at all. The links should take them to a bug reporter-style area where they can submit reports.
Score: 35 Votes (Like | Disagree)

Watabou
This is a welcome change, and about time, Apple!

I remember Overcast broke popovers for iOS 9 users and people started giving it negative reviews. Because they were running a beta OS. And that somehow means the developer is at fault.
Score: 25 Votes (Like | Disagree)

gnasher729
Fact is, there are lots of reviews written by absolute idiots. i looked at one app that does X, clearly describes that it does X, does X very well, and has a few 5* reviews plus one 1* saying "I thought it does Y, but it doesn't". Well, if it clearly says it does X and you think it does Y, then you deserve the 1* and not the app.

One quite popular audiobook is on iTunes for $22, on Amazon it's two parts each for $14. Guess how many reviews complaining about the iTunes price (yes, $22 is so much more than 2 x $14). Idiots. And how is complaining about the price in a review useful to anyone? I can see the price. It's clearly advertised. You don't have to tell me in the review. Tell me about the product, the things that I cannot see from the product description.
Score: 19 Votes (Like | Disagree)

If you willingly signed up and installed a buggy OS you shouldn't be able to have a negative impact on the app because it doesn't work on a buggy OS.
Score: 9 Votes (Like | Disagree)

They're very clear, over and over again, during the process about what a Beta is.

But people want new and shiny toys right now, ignore the warnings, and then only care about the inevitable problems when they arise.
Score: 6 Votes (Like | Disagree)
Read All Comments

Deals: AirPods Pro Are Available to Ship Today at $234.98 on Amazon