With less than two weeks until the launch of Apple Music in over 100 countries, the latest signs of the streaming music service continue to appear in iOS 8.4 and iOS 9 betas. A number of users running the pre-release software versions have shared screenshots showing a new Radio tab in the Music app that displays a Beats 1 demo alongside a list of other stations and genres. 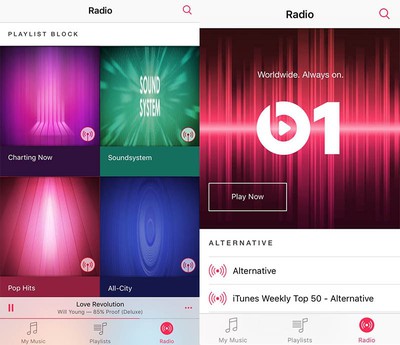 The new Radio tab and Beats 1 pre-recording by DJ Zane Lowe have gone live for users in the United States, Canada, Germany, Norway, United Kingdom and select other countries, although it remains unclear if all features of Apple Music will be available worldwide on June 30. The search feature in the Radio tab is working as of now for some users, but Beats 1 and other playlists cannot be listened to yet.

The curated playlists shown in the screenshots cover a wide selection of genres, including classic, indie, pop-hits, all-city, francophone hits and charting music. Searching for and tapping on an individual song brings you to the Apple Music subscription menu that began appearing earlier this month and has revealed possible international pricing of €9.99/£9.99 per month in Europe and as low as $2-$3 per month in some countries.

What I want to know is: Does Apple Music use up you monthly data on your phone? Or does the data used to run it cost nothing

It uses data from your data plan because there is no announced deal with carriers and there is no such thing as magic.
Score: 25 Votes (Like | Disagree)

Get users to pay for radio. Wow that takes some balls!!! or poor education from parents to children.

paying to browse a shop for clothes, electronics or food. I **** you not. Tokenisation of bluetooth and wifi to debit your apple account everytime you enter a shop.

Beats 1 radio is free. You don't have to be signed up for any special plan to listen to it.
Score: 16 Votes (Like | Disagree)

newdeal
I am not sure, maybe I am wrong, but I feel this will be the next Ping
Score: 6 Votes (Like | Disagree)

Zxxv
Get users to pay for radio. Wow that takes some balls!!! or poor education from parents to children.

paying to browse a shop for clothes, electronics or food. I **** you not. Tokenisation of bluetooth and wifi to debit your apple account everytime you enter a shop.
Score: 4 Votes (Like | Disagree)

Which is about 1MB per minute.

not quite. 128 Kbps is 16 kB/s which is about 0.012Mb per second or 0.72Mb per minute. Yeah I get .72 could be said to be "about 1Mb" but that is a pretty big difference once you start to add up over a longer duration. For example over an hour that becomes 43.2Mb vs 60Mb. People average about 2.5hr per day of terrestrial radio (streaming radio is probably higher for this demographic but I didn't look up the data) so in a given months time that would equate to about 77.5 hours. This would be about 3348Mb vs 4650Mb.

Lastly, this also does not factor in the potential for other compression technologies that may be used to reduce the size of data in-transit, however, I wouldn't assume this when trying to plan how much streaming music you can listen to with your data plan.

Friday July 23, 2021 8:07 am PDT by Sami Fathi
Yesterday, DigiTimes claimed that the upcoming iPad mini will feature a mini-LED display, but now, display analyst Ross Young is going at odds with that report, claiming that while the updated iPad mini continues to be on track for a release this year, it won't feature a mini-LED display. Young says he "confirmed" with Radiant Opto-Electronics, who DigiTimes claims would provide Apple with...
Read Full Article • 62 comments