Apple today announced Apple Music, an all-in-one app for discovering, listening to and sharing music. Apple Music is both a streaming music service and 24-hour live radio station, in addition to a platform for artists to share lyrics, backstage photos, videos or latest songs for fans to comment on and share through social media. 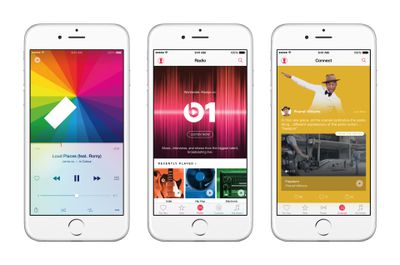 Apple Music's streaming music service enables users to search and stream millions of songs from iTunes, with human curated playlists from music experts for improved personalization over algorithmically created playlists. Apple Music will be available for iPhone, iPad, Mac and PC on June 30, with support for Apple TV and Android coming in the fall.

Apple's new 24-hour global radio station called Beats 1 will be broadcast live in over 100 countries, headlined by former BBC radio DJ Zane Lowe alongside other famous DJs from Los Angeles, New York and London such as Ebro Darden and Julie Adenuga. Beats 1 will offer exclusive interviews, guest hosts and keep tabs on what is going on in the music world.

Apple Music Connect is the social platform built into Apple Music that allows users to connect with artists and share their favorite songs and albums through Facebook, Twitter, iMessage and email. Apple hopes that Apple Music Connect will help not only major artists, but ones that are indie or relatively unknown, more easily promote their music and engage with their fans.

elgrecomac
Wtf. Is this the worst WWDC keynote ever? I vote "yes"
Score: 54 Votes (Like | Disagree)

The audience laughed when Irvine said that Apple Music is a 'revolutionary music service'. He is a terrible speaker by the way, I actually didn't understand what he was saying most of the time. Good thing Cue is still there.

People laughed because it sounded like a unintentional homage to Steve Jobs iPhone launch
Score: 33 Votes (Like | Disagree)

KALLT
The audience laughed when Irvine said that Apple Music is a 'revolutionary music service'. He is a terrible speaker by the way, I actually didn't understand what he was saying most of the time. Good thing Cue is still there.
Score: 33 Votes (Like | Disagree)