GarageBand for Mac Gaining New Synths and Features on June 30

Apple has updated its GarageBand for Mac website to confirm that the music creation software will be updated with new features on June 30 alongside the launch of Apple Music, as noted by Macworld editor Kirk McElhearn on his personal blog Kirkville. GarageBand will gain new synth sounds and the software's built-in recording and editing features will be improved. 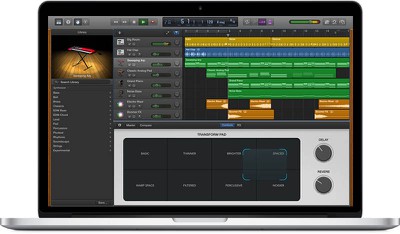 Apple will be adding 100 shape-shifting EDM‑ and Hip Hop‑inspired synth sounds to GarageBand that each feature the Transform Pad Smart Control for morphing and tweaking sounds to your personal liking. The new controls are very similar to the Alchemy software that Apple acquired through its recent purchase of Camel Audio, known for its range of plug-ins, synthesizers, effects and sound libraries.

Some of the new synths are demoed on the GarageBand website, including Sweeping Arp, Droplets, Bright Punchy Synth, Pumping Synth Waves and Epic Hook Synth. Apple further outlines that GarageBand's software instrument Smart Controls and Piano Roll Editor will be improved, allowing changes to be captured in real time and fine-tuning of music afterwards.

"Capture your changes in real time by adjusting any of your software instruments’ Smart Controls while recording a performance," reads a caption on the GarageBand website. "You can also fine‑tune your music later in the Piano Roll Editor." A footnote lists the new features as available on June 30 in the United States and as "coming soon" in other countries, consistent with the Apple Music website.

It is possible that Apple may also add a way for GarageBand users to upload new music to Apple Music Connect, a social platform that will enable artists to connect with fans. Apple hopes that Apple Music Connect will help not only well-known musicians, but also unsigned artists, to more easily promote their music and engage with their fans through one centralized platform.

Traverse
Wow, a first-party Mac application getting more powerful? Haven't seen that in a while.
Score: 8 Votes (Like | Disagree)

I enjoy this app, but I wish it was never called GarageBand.

karmakat
I find it fascinating that despite the recent jump in the popularity of podcasting they would still leave those who want to produce podcasts with Apple tools out in the cold. They've even removed all references to the Podcast Producer app that you had to buy the server version of the OS to use. So weird.
Score: 2 Votes (Like | Disagree)

teslo
people don't realize how powerful garageband and iMovie are (can be). some vids out there using all of about $10 in 3rd party animation/content software along with these two free programs can make really professional looking stuff. its all about avoiding cliches, i.e. getting to know the programs for more than 30m to do 'that one thing you hoped it would do.'

tangential but relevant - i got tired of missing out on editing my band's vids simply because i couldn't afford final cut, so i gave it a shot on iMovie (after doing a simple edit in logic 'garageband' pro) and ended up with a really decent product utilizing lots of quick effective edits. all it takes is time and patience - and if you find you can't do something with the free version, you upgrade, as so much time is invested and you've learned so much. such a good business model.. definitely actively saving for final cut.
Score: 2 Votes (Like | Disagree)

Wednesday May 12, 2021 10:03 am PDT by Juli Clover
Apple's M1 iMacs are set to start delivering to customers next week, and ahead of the official launch day, benchmarks for the machines have been showing up on Geekbench, likely from reviewers who are testing them. It will come as no surprise that M1 iMac benchmarks are right on par with benchmarks for the M1 MacBook Pro, MacBook Air, and Mac mini, coming in with an average single-core score...
Read Full Article • 256 comments

Wednesday May 12, 2021 3:54 pm PDT by Juli Clover
In the ongoing legal battle between Apple and Epic Games, the two companies are this week calling up their expert witnesses to argue their points before Judge Yvonne Gonzalez Rogers, who will make a decision in the case after a three week trial. Expert testimony is not as exciting as some of the leaked App Store documents that were highlighted last week, especially as much of what's being...
Read Full Article • 246 comments