"The report found that Apple continues to be the most aggressive in powering its data center operations with renewable energy. Despite continued rapid growth, Apple appears to have kept pace with its supply of renewable energy, maintaining its claim of a 100% renewably powered cloud for another year, followed by Yahoo, Facebook and Google with 73%, 49% and 46% clean energy respectively. Greenpeace found that Amazon’s current investments would deliver an energy mix of 23% renewable energy for its operations."

The annual report is based on energy transparency, renewable energy commitment and policy, energy efficiency and mitigation, and renewable energy deployment and advocacy, all categories in which Apple received an A, the highest score awarded. Apple was the only technology company with a perfect scorecard in the report. 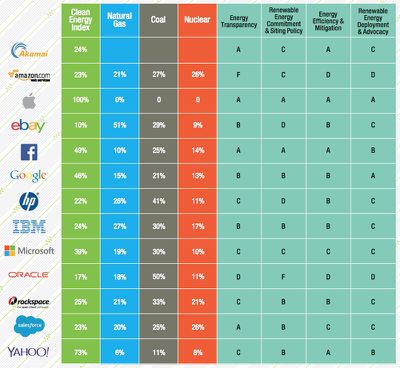 Greenpeace has been evaluating the energy demand of the internet and internet-related companies since 2010. The non-governmental environmental activist group was critical of Apple's environmental record for several years, and remained skeptical about the company's early push into renewable energy sources, but started recognizing and commending the iPhone maker for its efforts beginning last year.

Apple shared its 2015 Environmental Responsibility Report in April, reflecting on the company's environmental progress during the 2014 fiscal year. The report highlights that 100% of the company's U.S. operations and 87% of its global operations are run on renewable energy. The report also reveals that Apple emitted 34.2 million metric tons of greenhouse gas emissions during the 12-month period ending September.

Greenpeace's full-length 2015 Click Clean Report [PDF] offers in-depth information about environmental initiatives that Apple and other technology companies have been undertaking, renewable energy for the cloud, powering data centers with renewable energy, a road map to a green internet and more. It also explains the methodology behind its letter-based scoring system.

dannyyankou
Now that's something the other companies can't copy.
Score: 21 Votes (Like | Disagree)

and now let's look at their manufacturing... :rolleyes:


And now, let's look at their competition...no really, why are you rolling your eyes? They're doing better than everyone else.
Score: 19 Votes (Like | Disagree)

iWillNotUpgrade
Key reason why I value Apple more highly than the competitors.

Surely, there's lots of room left for improvement but at least they're taking strides in the right direction.
Score: 17 Votes (Like | Disagree)

Now that's something the other companies can't copy.


This is one thing I want every company to copy.
Score: 16 Votes (Like | Disagree)

Was just about to say this.


Could you please post some reliable sources for that?

Interesting how nuclear power is considered non-clean on these charts.

Screw clean energy. We need cheap energy. Please use coal! Debt, massive unemployment, businesses clearing out and moving to other countries because of high energy costs.

Not using coal is gutting America financially. If this isn't realized soon, this country is going to fall apart.

It's as simple as that.


So we should continue our AMERICAN QUEST for leveling mountain tops, starting decades long underground fires, and making entire regions of the country uninhabitable for the next thousand years?
Score: 13 Votes (Like | Disagree)
Read All Comments