LifeMap Solutions, co-creators of the ResearchKit Asthma Health app [Direct Link], yesterday published a blog post detailing the success of the first few weeks of the app's lifespan and how it has engaged its users in return visits as much as some social media and gaming apps on iOS.

In the official ResearchKit blog post, LifeMap Solutions details the preliminary findings of the Asthma Health app, which aims to attain greater insight into the disease and subsequently attempt to help users become more educated on the issues at hand. 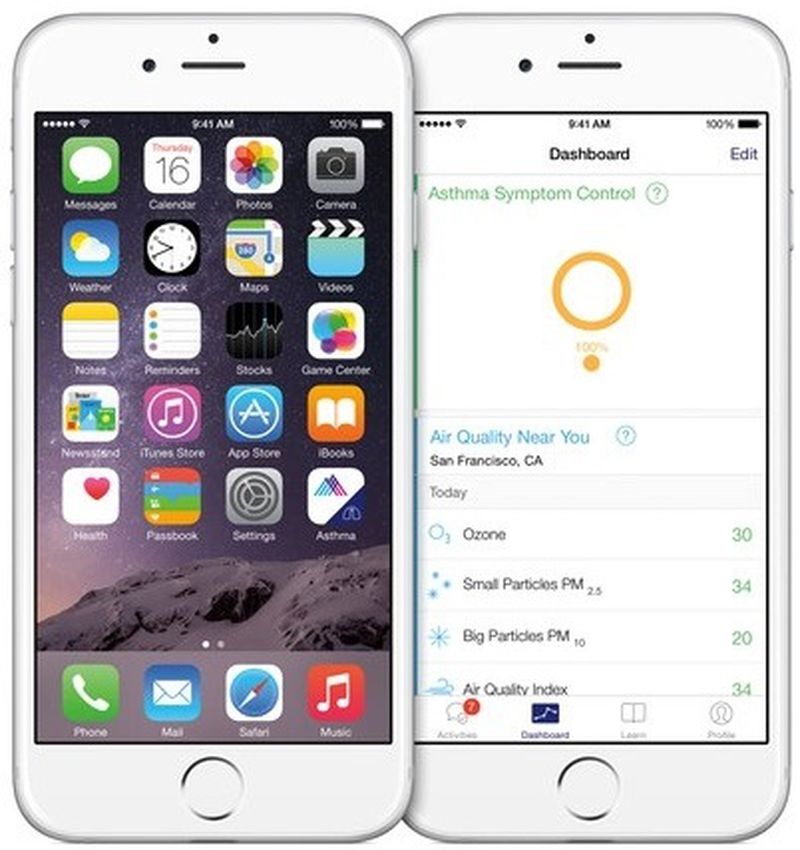 The developers were initially worried about the tricky e-consent process every user must go through when first launching the app, with secondary concerns wondering if users would find the experience as "sticky" and addictive as other apps they use daily. Asthma Health's usage data showcased not only willingness to give e-consent, but a high engagement rate in returning to the app throughout the week.

But the gamble paid off. Based on preliminary data for the Asthma Health app, over half of our users not only complete the e-consent process, they also come back the very next day to use the app. This is a very high rate of return for any app, let alone a health-related app.

Excitingly, results have shown that users are as engaged (or more!) with Asthma Health as they are with games and social networks. Our working theory is that Asthma Health users are motivated by the goal of supporting research that helps the entire patient community. We plan to test this theory more extensively in the near future.

The developers also saw particularly high involvement in the app on Mondays, corresponding to a weekly push notification automated to hit early each week. As the developers said, even though overall engagement decreases, "The spikes in app usage are consistent with the type of behavior we see in mobile apps more broadly: users respond dramatically to regular reminders."

Asthma Health's engagement rate over the course of its first few weeks.
Apple first announced ResearchKit at its "Spring Forward" media event on March 9, the Asthma Health app one of four experiences to launch supporting the platform. The mobile open source framework allowed for thousands to sign up for those initial four launch apps, far more than any location-based study could ever have hoped for.

With the official release of the full ResearchKit suite earlier in April, now even more developers can capture the features of the iPhone's sensors such as the accelerometer, gyroscope, microphone and GPS to create medical research experiences and conduct studies like LifeMap Solutions and its partner Mount Sinai have done with Asthma Health.

Image (https://cdn.macrumors.com/article-new/2015/05/asthma-health-app.jpg)
The developers were initially worried about the tricky e-consent process every user must go through when first launching the app, with secondary concerns wondering if users would find the experience as "sticky" and addictive as other apps they use daily. Asthma Health's usage data showcased not only willingness to give e-consent, but a high engagement rate in returning to the app throughout the week.


Hmmm. Daily use of an app is "addictive"? What does that make MacRumors?
Score: 1 Votes (Like | Disagree)
Read All Comments

Thursday April 2, 2020 4:06 pm PDT by Juli Clover
Apple's new low-cost iPhone is set to launch as early as Friday, April 3, according to a new report from 9to5Mac that cites a tip from a "highly trusted reader." The site says that while it can't be certain about the launch date, "Apple could reveal and begin taking orders for the new iPhone as soon as tomorrow." The iPhone 8 Apple is said to be planning to call the new iPhone, which is...
Read Full Article • 279 comments

Friday April 3, 2020 3:58 am PDT by Tim Hardwick
Apple paid out $75,000 to a hacker for identifying multiple zero-day vulnerabilities in its software, some of which could be used to hijack the camera on a MacBook or an iPhone, according to Forbes. A zero-day vulnerability refers to a security hole in software that is unknown to the software developer and the public, although it may already be known by attackers who are quietly exploiting...
Read Full Article • 41 comments

Thursday April 2, 2020 8:10 pm PDT by Joe Rossignol
Another clue has surfaced to suggest that Apple's rumored lower-cost iPhone SE successor will likely be released soon. Earlier today, a product listing for a Belkin screen protector on Apple's online store was updated to reflect compatibility with not only the iPhone 7 and iPhone 8, but also the iPhone SE. Given the original iPhone SE was a 4-inch device, and the iPhone 7 and iPhone 8 are...
Read Full Article • 115 comments