ResearchKit was previously limited to a handful of exclusive launch partners, including the Weill Cornell Medical College, Mount Sinai, University of Rochester, Dana-Farber Cancer Institute, UCLA Fielding School of Public Health, Penn Medicine, and Sage Bionetworks, Stanford Medicine and University of Oxford. Now, all developers and medical researchers will have access to the open source framework. 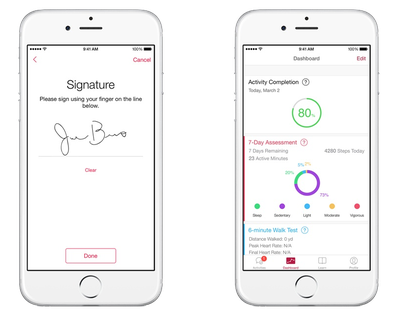 Apple introduced ResearchKit at its Spring Forward media event in March, with a lineup of initials apps available that study asthma, breast cancer, cardiovascular disease, diabetes and Parkinson’s disease. Apple announced that those apps, including Asthma Health, mPower, GlucoSuccess, Share the Journey and MyHeart Counts, have received over 60,000 signups since being released on the App Store last month.

“We are delighted and encouraged by the response to ResearchKit from the medical and research community and the participants contributing to medical research. Studies that historically attracted a few hundred participants are now attracting participants in the tens of thousands,” said Jeff Williams, Apple’s senior vice president of Operations. “Medical researchers all over the world are actively exploring how ResearchKit can help them study even more diseases, and we believe the impact on global understanding of health and wellness will be profound.”

ResearchKit apps use iPhone sensors such as the accelerometer, gyroscope, microphone and GPS to track a user's activity levels, motor impairments, memory and more. The research apps, available on the App Store in the United States, are compatible with the iPhone 5, iPhone 5s, iPhone 6, iPhone 6 Plus and fifth-generation iPod touch. Apple notes that it will be introducing the open source medical framework in other countries soon.

“ResearchKit could help us reach people all over the world who are willing to contribute to medical research, but might not know how or be able to get involved,” said Ricky Bloomfield, Director of Mobile Technology Strategy and Assistant Professor in Internal Medicine & Pediatrics at Duke University. “Our team of researchers is now launching the development of an exciting new study using the ResearchKit framework, which will enable us to gather data quickly, from more participants than we are typically able to reach.”

“Because of the ubiquity of iPhone and the elegant implementation of consent, survey and instrumented data collection, ResearchKit has enormous promise for leading the transformation of how we engage patients in research,” said Kenneth Mandl, MD, MPH, of the Boston Children’s Hospital Informatics Program. “Now that we have access to the ResearchKit framework, our team can start customizing the initial modules and even design new ones for our particular study.”

More specifically, when given permission, ResearchKit can attain user data like weight, blood pressure, glucose levels and asthma inhaler use through third-party apps and devices. With hundreds of millions of iPhone users, the service will also give researches a more streamlined experience in recruiting and gaining data from study participants, allowing users to answer surveys and input data right from the app.

The announcement follows a new Apple-IBM partnership to support ResearchKit and HealthKit apps.

aaronvan
Great, this is where Apple really changes the world.
Score: 4 Votes (Like | Disagree)

ToomeyND
This was the most incredible part of the apple watch announcement. Better than the watch or the macbook. It's one of those things, after the fact, that seems like a no brainer. However, it was the integration of so many monitoring devices added to the iPhone over the years that brought it to this point.
Score: 4 Votes (Like | Disagree)

This area is very exciting, IMO. Medical-health related research & sharing will propel Apple to the next level that even Samsung et al won't reach on their bendable phones.
Score: 2 Votes (Like | Disagree)

MartinAppleGuy
When will those first 5 apps come out in the UK then?
Score: 2 Votes (Like | Disagree)


You forgot the [/sarcasm] tag.


I just think Tim Cook is a sick person, for Publicly using people's health as a means to generate maximum profits.
Making out his only interest is the health and welfare of people, using this as a tactic to generate more profits, whilst doing all they can to raise prices of their devices.
Very devious minded individual playing on people's health concerns for pure financial gain.

As I say, if Apple genuinely cared, there is nothing on this planet stopping them from building lower priced hardware that incorporated all the health benefit items they are promoting, even if this lacked many of the other not needed features for health.
Score: 1 Votes (Like | Disagree)
Read All Comments