The beta, build 12H4086d, is available as an over-the-air download and through the iOS Developer Center. 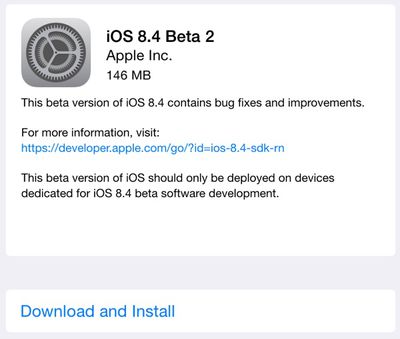 iOS 8.4 introduces an all-new Music app, which has a revamped design that shows pictures of artists in the Artists view and offers personalized playlists. It includes a new MiniPlayer, a redesigned look for "Now Playing," global search capabilities that make it easier to search within the Music app, and a streamlined design for iTunes Radio to bolster music discovery.


The first iOS 8.4 beta had a long list of bugs associated with the new Music app, and it's likely that today's update fixes several of those issues to make the app more stable.

iOS 8.4's redesigned music app comes ahead of the rumored debut of a revamped streaming music service that could make an appearance at the Worldwide Developers Conference in June. The upcoming streaming music service is said to be similar to Apple's existing Beats music service, but with a rebranding, a redesign, deeper integration into iTunes, and a focus on exclusive content.

Missing music bug - Several users are reporting that installing iOS 8.4 beta 2 caused them to lose all of their music installed on their devices. Those who have lost music are not able to reinstall it by syncing via iTunes, but going to Preference --> Music --> and turning on "Show All Music" has solved the problem for some users with missing music.

Trending Search - When searching for a song on iTunes Radio using the new global search feature, a list of trending searches is displayed.

Fixes - According to the release notes, Apple has addressed a number of issues from the first beta, including resolving a crashing Music app when used with CarPlay, adding search back to the iPad version of the App Store, and fixing problems with MFi GPS accessory support. The company has, however, yet to address most of the many Music apps bugs documented in the first beta, as they remain listed in the release notes for the new beta.

schmidm77
Apple really should follow the lead of other operating systems and decouple their user apps from the operating system distribution. It's silly that it takes an iOS update to get new features and bug fixes to mail, photos, music player, etc.
Score: 10 Votes (Like | Disagree)

Music app is not ready for primetime, and this "show all music" solution is not acceptable for me.

Edit: And Feedback Assist hasn't been updated for 8.4


this in not meant to be primetime ready. it's a BETA!
Score: 6 Votes (Like | Disagree)

happywaiman
For those who think they lost their music:
Go to Preference->Music->Turn on Show All Music
Score: 6 Votes (Like | Disagree)

my music went puff as well and its not re-synching either ...
Score: 6 Votes (Like | Disagree)

That way is completely unauthorized, and I don't suggest anyone do it.

You run the risk of bricking your device.


I'm sorry but that is absolute nonsense. It's the exact same profile Apple give you access to via the invite. Once installed you can install the public BETA.

I used it for the whole duration of 8.3 public BETA.
Score: 4 Votes (Like | Disagree)

Wreckus
does anyone else wish apple goes with a different colour for the icon & font colour? Not sure why but i'm not a fan of the red colour.
Score: 4 Votes (Like | Disagree)
Read All Comments