Famous film director and producer J.J. Abrams is the latest celebrity to be spotted with an Apple Watch, which he's wearing right now during the Force Awakens Panel at the Star Wars Celebration in Anaheim, California. Abrams appears to be wearing a stainless steel Apple Watch with a blue band. It is possible that the band is the Blue Modern buckle for the 38mm Apple Watch, but there's also a possibility that it's a custom made navy blue Sport Band created specifically for Abrams. 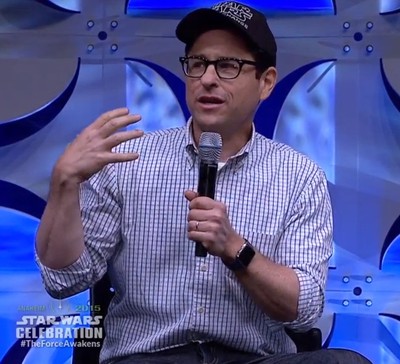 Along with Abrams, several other celebrities have been seen wearing the Apple Watch. Pharrell Williams wore it on reality TV show The Voice, and both Katy Perry and Drake shared Instagram photos of themselves wearing gold Apple Watch Edition models. Yesterday, a photo surfaced of designer Karl Lagerfeld with a custom gold Apple Watch with matching gold Link Bracelet.


As the launch of the Apple Watch approaches, we're likely to see it popping up on the wrists of other style icons, including celebrities, fashion designers, directors, and more, in an effort to introduce the Apple Watch to the public through these influencers. Apple's also been heavily marketing the Apple Watch in magazines and on television.
[ 335 comments ]

Why is it that rich people get the watch early for free and yet customers have to purchase it and then wait? It reminds me of the tax system of the USA.

Sorry bud. It is. He ain't rocking any Android shizzle.

This is not the Droid watch you are looking for.
Score: 55 Votes (Like | Disagree)

2457282
Is apple gifting the watches to all the celebs or are they getting to purchase them ahead of everyone.

Regardless, now we know why there is such a shortage.
Score: 41 Votes (Like | Disagree)

Jason83
I almost didn't recognize him without lens flare.
Score: 38 Votes (Like | Disagree)

EvilEvil
So is Macrumors going to make a post every time a celebrity is seen wearing an iWatch?
Score: 32 Votes (Like | Disagree)

mdelvecchio
people - the reason Apple gives them devices pre-launch is for the publicity it generates. eg, we're talking about it right now.
Score: 30 Votes (Like | Disagree)
Read All Comments