Last week, Apple released OS X Yosemite 10.10.3 with support for the new Photos for OS X app, the company's replacement for both iPhoto and Aperture; Apple also removed both apps from the Mac App Store shortly after Photos was released. Today, Apple released a support document detailing exactly what users can expect when they migrate their content from Aperture and iPhoto to Photos. 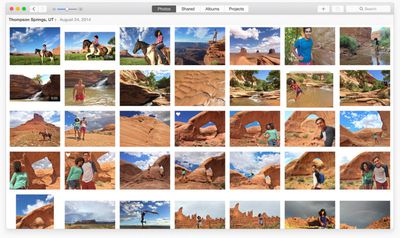 When iPhoto content (photos and video) and metadata are migrated over to Photos, they do so without changes. Images migrate over with the adjustments that were applied within iPhoto. Users will not be able to alter the images, but they will be able to revert to the original photo before adjustments were applied. Slideshows and Albums are both preserved in Photos with a few exceptions. Slideshows that use themes not available in Photos have the default theme attached to them, while Smart Albums where none of its Smart Album criteria are supported by Photos are not migrated over.

Keywords are preserved in Photos, and most metadata is migrated over, but there are some exceptions. Some IPTC metadata like Copyright are still attached to works, but they won't be visible within Photos. They can still be viewed in programs that recognize and display the select IPTC data, like iPhoto and Aperture. Finally, Events are transferred to an album called iPhoto Events in the Album View section of Photos for OS X.

Aperture's migration of content and metadata works similar to iPhoto, but with a few significant differences. Aperture projects and subfolders migrate to folders called Aperture Projects and iPhoto Events, both of which are available to view in the Album View section of Photos. Photo books also migrate to the Album section of the app. Captions are preserved in Photos, but star ratings, flagged images and color labels are turned into keywords. For example, a one-star rating shows up as "1 star" keyword, flagged images have "flagged" keywords attached and the green color label turns into a "green" keyword. Finally, custom metadata fields to not transfer to Photos.

The entire support document is helpful for those worrying about transferring their content over to Photos and can be viewed on Apple's website.

FieldingMellish
Any Mac app reconfigured to work with IOS is watered down in order to do so.
Score: 13 Votes (Like | Disagree)

macbeta
Sticking with iPhoto and Lightroom.

I don't like it, Some deeply flawed ideas. One of the most useful features of iPhoto was dragging a picture out to a folder or to an application like photoshop. Dragging out a raw file creates a JPG and deposits it in the folder and you cannot drag into photoshop or send the raw to an external editor. Useless.
Score: 5 Votes (Like | Disagree)

AppleDeviceUser
So I migrated over thinking it would handle my library (40,000 photos) better than iPhoto did, editing options are less than before and it still crashes and freezes all the time. What the hell Apple?!
Plus they removed aperture off the app store, why? It's not like "photos" replaced all those editing features. Again... What the hell Apple?!
Score: 4 Votes (Like | Disagree)

I just don't understand why in the Photos app they removed the ability to merge or split albums. Also Aperture and iPhoto sorted Projects and Events by date with the most recent first. That made sense. Now Photos doesn't allow for that. If you want by date you need to scroll down to get to the most reason. Not really intuitive at best and definitely annoying.
Score: 4 Votes (Like | Disagree)

thekeyring
Personally, I prefer photos to iPhoto, but I understand people's complaints, especially those trying to cope using it as an Apeture replacement.

iCloud Photo Library does actually seem intuitive but it's annoying that it's blocked by a paywall for me.

Either give me more storage for free - my photo library is relatively small (people on here talk about collections with 40,000 photos in, I only have 7GB of photos) or allow me to store - for example - my 3 most recent events in iCloud, and keep the rest on my Mac.

I want a response to this to! Can I delete the iPhoto one?


After moving all my photos into the Photos app, I deleted the iPhoto library, and have had no problems with the Photos app.
Score: 3 Votes (Like | Disagree)

I don't like it, Some deeply flawed ideas. One of the most useful features of iPhoto was dragging a picture out to a folder or to an application like photoshop. Dragging out a raw file creates a JPG and deposits it in the folder and you cannot drag into photoshop or send the raw to an external editor. Useless.

I had issues with this as well, until they rethink this option you should just go File->Export->Unmodified Original.

>360.000 and 2TB. Not going into cloud. iCloud photo library looks much better than what it replaces, but please Apple, give us better tools to handle what goes to the cloud and what stays on our local storage systems (I've three local copies). And make sure that Photos works with large libraries - number of photos is not going to shrink over years and it's not unheard of to have hundreds of thousands, over decade or two!

Disagree. There is nothing normal with 360,000 photos in a library. Apple targets the mainstream here. If you need to manage such volums you are not a priority.

I'm calling BS on this. Even if true, we'd be talking months or years and Apple hasn't committed to any of this. Not even to add what should be the most basic functionality.

Short answer: you can't. Photos is a least-common-denominator approach; because Photos for iOS lacks a way to tag location to existing photos, Photos for OSX apparently can't have that functionality either. Similar to when Apple neutered the iWork for OSX suite to make it feature compatible with the iOS apps. Embarrassing, really, for a company of Apple's size.


You´re no fun. It´s version 1. Give Apple a break. It´s a fantastic first release. Obviously they will keep hacking up features. Until you find them, find alternative ways of doing things. Need to GEOTag something? Just export out of Photos, and into iPhoto, tag and re-import into Photos.
Score: 2 Votes (Like | Disagree)
Read All Comments