Ahead of last Friday's launch of the new Retina MacBook, we saw several early benchmarks for the entry-level notebook running a 1.1 GHz Intel Core M processor, putting CPU performance for the new machine roughly on par with the 2011 MacBook Air according to Geekbench.

With the machines now available for purchase, we're starting to see Geekbench results for the mid-range 1.2 GHz processor, revealing a significant performance boost over the low-end chip for multi-core benchmarks, but less so for single-core testing.

It will take a little while for Geekbench results to firm up as the machines work through their early housekeeping tasks, but the best results we're seeing so far for the 1.2 GHz model are approaching 2600 on 64-bit single-core tests and over 5300 on multi-core tests. That performance compares to roughly 2400/4450 for the 1.1 GHz model, meaning that the mid-range model seems to be showing performance improvements at least in line with the 9 percent increase in CPU frequency. Multi-core performance in particular seems to be seeing a nice bump with the faster chip. 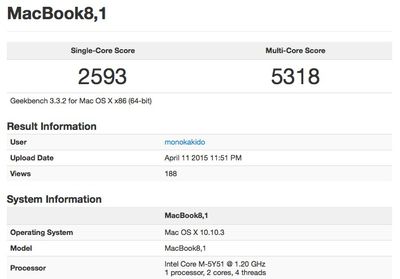 These scores for the 1.2 GHz Retina MacBook are roughly in the same range as the low-end models of the previous-generation Early 2014 MacBook Air, despite the much lower power consumption that has enabled Apple to build an ultra-thin fanless design.

In addition to the 1.1 GHz and 1.2 GHz chip options, Apple is also offering a 1.3 GHz processor as a build-to-order option. We have, however, yet to see any Geekbench results for these chips, and shipping estimates for machines with these chips were at 3-4 weeks when Apple began taking orders on Friday, suggesting it may yet be some time before we see data on their performance.

Apple is taking advantage of Intel's latest "Core M" Broadwell chips for the new Retina MacBook. The chips offer extremely low power usage, but Apple is slightly overclocking these chips for higher performance. The low-end MacBook uses a 5Y31 chip that runs by default at 900 MHz but which supports overclocking to 1.1 GHz at the cost of bumping power consumption from 4.5 watts to 6 watts, and Apple has elected to use the faster speeds to improve performance.

The Retina MacBook is in very short supply following its launch last Friday, with all stock and custom configurations currently listed as shipping in 4-6 weeks from Apple's online store. The company's retail stores also have yet to begin stocking the new machines, although some (mainly in the United States) do have models on display for customers to test out.

I still do not understand the selling point of this device.

It is more pricey than an Air and slower. Sure but has a nice screen but if there is an Air revision then it's expected to have the ForceTouch and also a Retina display.

I know I'm probably going to be based but unless you REALLY need USB-C or REQUIRE Retina on a sub 13in device I do not get why you would buy the MacBook. I'm all ears as to why ANYONE thinks this is the perfect device for them over the Air, but I have not seen a single person make that statement.

I do admit the Space Grey is sexy though.


I don't understand why people are trying to figure out why someone wants to buy it.

I'm getting it because I insist on having a retina screen and want something more portable than my 13" rMBP. I don't want to wait for the Airs to get a retina screen. I don't care about having 1 port. I don't do anything that needs a faster more capable CPU. Is this machine expensive? Yes but if I'm willing to pay that much for what it offers, why does it bother others so much?
Score: 34 Votes (Like | Disagree)

Incoming: all the comments from people who are far from the target of this laptop.
Score: 32 Votes (Like | Disagree)


Someone needs to get you an instruction manual.
Score: 30 Votes (Like | Disagree)

Alumeenium
Finally a Computer that's as fast as an iPhone ... :D
Score: 26 Votes (Like | Disagree)

Incoming: all the comments from people who are far from the target of this laptop.


And who is the target of this Macbook? People with more money than brains?
Score: 23 Votes (Like | Disagree)