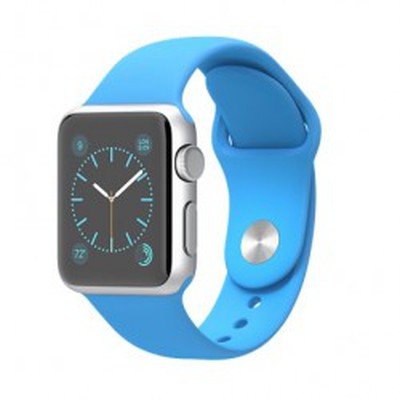 A collection of major tech blogs yesterday published their in-depth reviews for the Apple Watch, one of which was Yahoo! Tech's David Pogue, whose opinion fell in line with most other sites, describing the Apple Watch as "light-years better" than any other smartwatch, but "you don't need one."

When discussing the Watch's tethering to an iPhone, Pogue reveals a few pieces of information about the Watch that Apple has yet to comment on in any promotional material for the wrist-worn device, mostly regarding some cellular-related functionality sans iPhone.

And here’s a surprising feature that Apple hasn’t said anything about previously: When the watch is in a known Wi-Fi hotspot, the watch can perform the most essential online functions even when your phone is completely dead, turned off, or absent. It can query Siri, for example, send and receive texts, and send/receive drawings and tap patterns to other watch owners. That’s impressive.

According to Pogue's week-long experience with the Apple Watch, even with the iPhone dead or turned off, his Watch could still perform these basic iPhone-reliant functions like sending and receiving texts and drawings. He never mentions actual phone calls, which are undoubtedly still reliant on full use of an iPhone.

Pogue also mentions the Watch's ability to communicate with an iPhone over both Bluetooth and Wi-Fi, meaning the two devices can communicate indefinitely as long as they stay under the same Wi-Fi connection even when they're out of Bluetooth range, a previously known but still notable aspect of the Watch.

Stay up to date on the latest Apple Watch news, from estimated shipping and delivery dates to the newest reviews, before Apple's first wearable device goes up for pre-order tonight at 12:01 AM Pacific Time.

How can it send/receive SMS if the phone is dead?

To all the people saying the apple watch doesn't connect to wifi, just wifi direct to iphone, suck it!
Score: 29 Votes (Like | Disagree)

dannyyankou
To everyone who argued it only uses the phone's wifi: I told you so!
Score: 15 Votes (Like | Disagree)

BlueMoon63
"It can query Siri, for example, send and receive texts, and send/receive drawings and tap patterns to other watch owners. That’s impressive."

That is awesome. Don't need my phone at all to send texts and respond to people. The #1 thing I do with my iPhone is texting. I am very impressed since I have about 100 known wi-fi networks on my IPhone.

I wonder if you will eventually be able to make phone calls with just the watch since you can make calls with Wi-Fi/VoIP? Maybe already works with Sprint and now T-Mobile which allow Phone calls over Wi-Fi?

Daalseth
This is the kind of stuff they should have been talking about months ago. For a lot of the doubters, myself included, one of the biggest weaknesses was that it only could do most functions tethered to the phone. Only NOW are we finding out, and not from Apple, that it has independent abilities. The Apple Watch has a lot of capabilities without the phone and that is huge. Marketing was so fixated on style and appearance, and getting on the cover of Vogue and what it could do through the iPhone, that they have been not mentioning huge features like this. This is a huge screw up by marketing.
Score: 5 Votes (Like | Disagree)

How can it send/receive SMS if the phone is dead?

Thursday May 13, 2021 10:32 pm PDT by Sami Fathi
A new rumor suggests that Apple will announce the third-generation AirPods and the recently rumored HiFi, or high-fidelity Apple Music tier, on Tuesday, May 18, via a press release on its website. The new rumor comes from Apple YouTuber Luke Miani who shared the alleged exclusive news with the AppleTrack website. According to the YouTuber, Apple plans to release the next-generation AirPods...
Read Full Article • 136 comments