Apple today seeded the fourth beta of iOS 8.3 to developers, nearly two weeks after seeding the third iOS 8.3 beta and more than a month and a half after releasing the first iOS 8.3 beta. Today's beta is also available for public beta testers.

The beta, build 12F61, is available as an over-the-air download and through the iOS Developer Center. Apple has also released Xcode 6.3 beta 4. 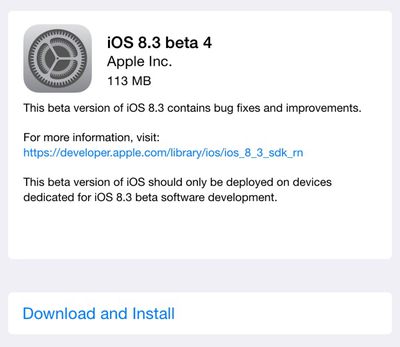 Along with those emoji changes, iOS 8.3 brings wireless CarPlay connectivity, support for Google 2-step verification, Apple Pay for the China UnionPay network, several new Siri languages, filters for Messages, a UI change for the space bar in Safari, and more. We've been tracking all the iOS 8.3 changes in our iOS 8 Features Roundup.

Messages filtering - An earlier beta introduced filtering in Messages, allowing users to separate messages received from friends and those received from strangers into two categories. In beta 4, the category for iMessages sent from those who are not in a user's contact list has been renamed to "Unknown Sender."

GOD i can't WAIT until the day comes where "emoji skin tone modifiers" isn't a selling point of iOS, what are we doing america?!

sundog925
GOD i can't WAIT until the day comes where "emoji skin tone modifiers" isn't a selling point of iOS, what are we doing america?!
Score: 15 Votes (Like | Disagree)

GOD i can't WAIT until the day comes where "emoji skin tone modifiers" isn't a selling point of iOS, what are we doing america?!


The next update needs to include eye-color modifiers. I am insulted that they don't include all the eye colors.
Score: 12 Votes (Like | Disagree)

illusionmist
Public beta... Signed up when the last one came out already but still unable to get in even now.
Score: 9 Votes (Like | Disagree)

omro
How do you sign up for the public beta? Everytime I go to the beta page, all I see are the yosemite betas.
Score: 8 Votes (Like | Disagree)