Apple today seeded the first beta of iOS 8.3 to registered developers for testing purposes, just a week after seeding the fifth beta of iOS 8.2, which is also currently in testing. 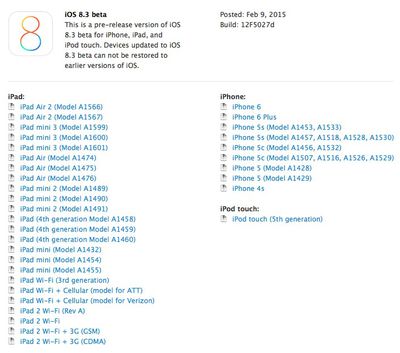 The beta, build number 12F5027d, also includes Xcode 6.3 beta with Swift 1.2. It is not clear at this time what the iOS 8.3 beta introduces, but it likely includes several bug fixes. As a .1 update, it may also introduce new features.

Xcode 6.3, included with the beta, introduces a new version of the Swift language. According to Apple's release notes, Swift 1.2 includes "a number of noteworthy changes" to the language. Xcode 6.3 also includes enhancements to ease interoperability between Swift and Objective-C code.

Based on our testing, iOS 8.3 appears to remove the "beta" label from iCloud Photo Library and it offers new CarPlay features, in the form of wireless connectivity. The CarPlay setting in the image below is located in the General section of the Settings app, below Siri, Spotlight Search, and Handoff & Suggested Apps. Currently, iPhones are only able to connect to CarPlay via the Lightning port.

iOS 8.3 introduces a new emoji picker, much like OS X 10.10.3, released to developers last week. The new emoji picker organizes emoji into categories in a scrollable list, but it does not appear to include placeholders for new emoji or an option for selecting new skin tones.

There's also support for Google two-step verification when logging into and adding Google accounts on iOS, removing some of the need for app specific passwords.

According to the iOS 8.3 release notes, Apple Pay may be available in China in the near future. iOS 8.3 introduces support for the China UnionPay network as previously rumored.

Another minor iOS 8.3 change is in Passbook, which now divides Apple Pay credit/debit cards and other cards into sections labeled "Apple Pay" and "Passes."


A 13 foot iPad is way to big for me, unless it's wall mountable. Then I'd be more than interested.
Score: 5 Votes (Like | Disagree)