Apple CEO Tim Cook called into "Mad Money" on CNBC today to speak to host Jim Cramer in honor of the show's 10th anniversary, where he shared some thoughts on ResearchKit, Apple's competitors, Apple Pay, the next frontiers of product development, and more.

When asked what he believes the "next frontiers" will be when it comes to product development, Tim Cook highlighted health as "the biggest one of all," along with cars and the home. According to Cook, devices like the Apple Watch and services like ResearchKit and the Health app that allow people to track their own health and fitness are part of a market that's "probably significantly underestimated." 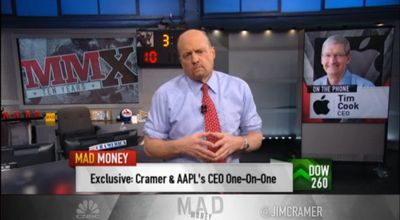 Cook called ResearchKit, which the company debuted on Monday, "an absolute game changer." ResearchKit is an open source software framework aimed at researchers, and several apps have already been created with it. On Wednesday, two days after the first apps were available, Stanford University researchers said they had received 11,000 signups for just one of them.

In regard to the Apple Watch and HealthKit, Cramer asked whether it was "within the realm of our lifetime" that the device paired with HealthKit might be able to monitor diabetes, blood pressure, and detect cancer, and Tim Cook said "Oh, I absolutely do."


On competition, when Cramer asked whether or not Apple felt like the competition had been left behind, Cook said the company is "always paranoid" and always working towards the best possible product.


We're always paranoid. We live paranoid. We always want the very best product. And so if we're not beating someone else we're trying to beat the thing that we have currently shipping.

Everybody here lives on edge.

As he often does, Cook spoke about Steve Jobs, reiterating that Jobs' DNA is "deep in the company" even though many of the products that Apple is shipping now were created entirely on Tim's watch, conceptualized after Jobs had passed away. Cook wrapped up the call by wishing an excited Cramer a happy anniversary.

Sol
Why is Tim Cook legitimising Jim Cramer by taking part on his show?
Score: 32 Votes (Like | Disagree)

Not at all. Did you see the way Cramer kept stuttering and slurring his words when he was trying to think of what to say to Cook. He was extremely caught off guard by the call. You could also tell that by his facial expressions.

If you think Cook calls in without the host knowing, you don't know anything about television.

Also Cramer is the worst actor on the planet, he's about as authentic as a $10 Apple Watch.
Score: 13 Votes (Like | Disagree)

The most interesting takeaway for me was how Tim thinks healthcare will be the biggest opportunity and Apple Watch (presumably) will eventually detect cancer. That would be amazing.

Yes and pigs will fly and the whole world will be in peace and we're all going to love Justin Bieber's music.

This is so scripted, omg.


Not at all. Did you see the way Cramer kept stuttering and slurring his words when he was trying to think of what to say to Cook. He was extremely caught off guard by the call. You could also tell that by his facial expressions.
Score: 9 Votes (Like | Disagree)
Read All Comments