Apple has decided to hire the majority of its day-to-day security staff in Silicon valley as full-time employees, a company spokeswoman confirmed to the San Jose Mercury News. Many of the security guards that Apple has hired in the past as contractors will become part of the company's expanded in-house security team and receive the same benefits as other employees, including full health insurance, retirement contributions and a leave of absence for new parents. 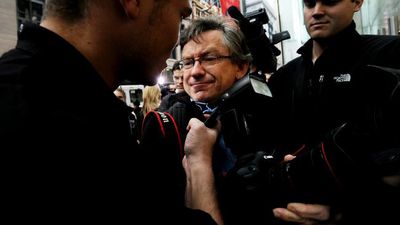 Apple security guard in dispute with photographer at iPad event (via The Australian)
Apple will continue using contractors as security guards for special events, such as the upcoming "Spring Forward" media event at the Yerba Buena Center for the Arts on March 9th. Apple is believed to have begun constructing an extension on the Yerba Buena Center over the weekend, possibly as an Apple Watch demo area, and security guards wearing "Apple Security" shirts were spotted monitoring the premises.

"We will be hiring a large number of full-time people to handle our day-to-day security needs," the spokeswoman told the San Jose Mercury News. "We hope that virtually all of these positions will be filled by employees from our current security vendor and we're working closely with them on this process."

Apple has faced increasing pressure to provide individuals who cook, clean and monitor security for the company with the same benefits as other employees. Local union United Service Workers West staged a protest on Apple's headquarters in Cupertino, California in December over complaints that its security contractor Security Industry Specialists treated workers poorly and that many positions were part-time.

Other service workers in Silicon Valley are also fighting for better wages and benefits. The Wall Street Journal reported that a group of 158 bus drivers working for Compass Transportation, which provides shuttle service for Apple, eBay, Genentech, Yahoo and Zynga, voted on Friday to be represented by local union Teamsters Local 853 in negotiations with Compass over fair working conditions.

While this might work for Apple overall, I'm worried about them caving into pressure too much. They "caved" in on worker's rights, diversity, environmental and now unions. These are not bad things but they will eventually lead to bad things like special interest groups that should have never formed pushing their political agendas on corporate America.

Once special interest groups smell blood or weakness, they do not stop until they are rich and their opposers are unemployed.


You do understand that the only powerful special interest groups in your country are big companies ?
Score: 7 Votes (Like | Disagree)

macintologist
This is a great step move and will demonstrate to corporate America that full time benefitted employees are more productive, happier and are easier to retain than part time contractual employees.
Score: 7 Votes (Like | Disagree)

AngerDanger
That's what you get when you don't shoot on iPhone 6: 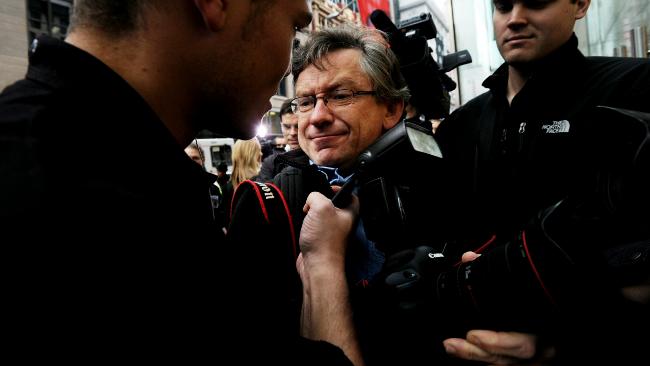 I really feel sorry for you if you think unions are anything except toxic cancer.

So how do you like that seven day work week and 10 cents an hour. Oh that's right you don't have to deal with that because unions got the 40 hour week, minimum wage, benefits etc. etc. for you.
Score: 5 Votes (Like | Disagree)

While this might work for Apple overall, I'm worried about them caving into pressure too much. They "caved" in on worker's rights, diversity, environmental and now unions. These are not bad things but they will eventually lead to bad things like special interest groups that should have never formed pushing their political agendas on corporate America.

Once special interest groups smell blood or weakness, they do not stop until they are rich and their opposers are unemployed.


Oh those poor oppressed and put upon corporations :rolleyes:

Cry me a river.
Score: 5 Votes (Like | Disagree)
Read All Comments

Thursday December 1, 2022 4:37 pm PST by Juli Clover
With the launch of iOS 16.1, Apple rolled out a Emergency SOS via Satellite, which is designed to allow iPhone 14 owners to contact emergency services using satellite connectivity when no cellular or WiFi connection is available. The feature was put to the test in Alaska today, when a man became stranded in a rural area. In the early hours of the morning on December 1, Alaska State Troopers ...
Read Full Article • 219 comments

Saturday December 3, 2022 10:23 am PST by Joe Rossignol
iPhone 12 Pro and Pro Max, iPhone 13 Pro and Pro Max, and iPhone 14 Pro and Pro Max models feature a LiDAR Scanner next to the rear camera that can be used to measure a person's height instantly in Apple's preinstalled Measure app. To measure a person's height, simply open the Measure app, point your iPhone at the person you want to measure, and make sure they are visible on the screen from...
Read Full Article • 79 comments