Today's second OS X 10.10.3 beta builds on the emoji groundwork laid with the first OS X 10.10.3 beta, introducing all new emoji and emoji skin tone modifiers. When selecting an emoji with a skin tone, such as one of the many people emoji, it's now possible to choose a specific skin tone from one of six options.

There are also several new people emoji that introduce greater diversity. Family emoji now include multiple same sex couples, both with children and without, all with variable skin tone options. Apple first promised to add more diversity to its emoji character set in early 2014, stating at that time that it was working with the Unicode Consortium to add more characters, and it appears the company will be making good on that pledge with the release of 10.10.3. 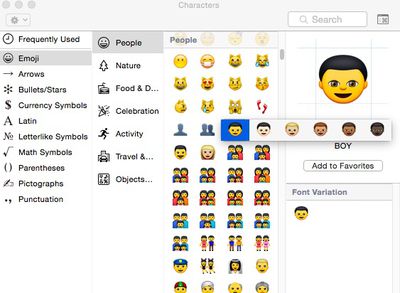 Along with a range of diversified people emoji, today's update brings 32 new country flags, including flags for Canada, Australia, and India.

Apple has also made several changes to emoji that are related to Apple products. The existing standard watch emoji has been replaced with an emoji that's based on its upcoming Apple Watch, with a black band and an analog watch face. The iPhone emoji has been updated to resemble the iPhone 6, and the computer emoji is now an iMac.

In addition to new emoji characters, OS X 10.10.3 introduces a renamed Character palette that focuses more heavily on emoji. Accessible through the "Edit" menu in most Mac apps, the palette was previously named "Special Characters," but is labeled "Emoji & Symbols" in OS X 10.10.3. The emoji picker has also been redesigned, featuring a layout with a single larger vertical-scrolling page for easier access to emoji.

maflynn
I see this is pretty high up in Apple's priority, I kind of wished that they spent their liimited time and energy fixing the existing bugs instead.
Score: 68 Votes (Like | Disagree)

Frign
Diversity my ass, emojis are so great because they are actually free from racial influences, or actually, have been now.
Score: 68 Votes (Like | Disagree)

Can't wait to see the Jony Ive video describing the thought process that went into the design of these new emojii..... :rolleyes:


Nah, that would come from Tim Cook. He's the one obsessing over stuff like this. Like incorporating gay rights into a cybersecurity speech.
Score: 23 Votes (Like | Disagree)

AlecZ
The only thing I'd care about would be having every country's flag, just because I sometimes want to send a flag but don't have it available. Who actually uses the non-yellow faces?
Score: 18 Votes (Like | Disagree)
Read All Comments