While the Grammy Awards happened last weekend, information on a few Apple-related conversations happening at and around Clive Davis' pre-Grammy party are just now beginning to emerge, reports Billboard. Representing Apple at the gala were Tim Cook, Eddy Cue, Jimmy Iovine and iTunes VP Robert Kondrk, with the Apple executives chatting with a number of music industry representatives during the event.

The party came as Iovine has reportedly been meeting with senior executives from many record labels in recent weeks, and while Billboard reports "a nondisclosure agreement preceded every sit-down," details on some of the discussions are beginning to trickle out. One of the main takeaways appears to be a targeted spring/summer launch window for the revamped Beats Music streaming service the company is said to be integrating with iOS and OS X. 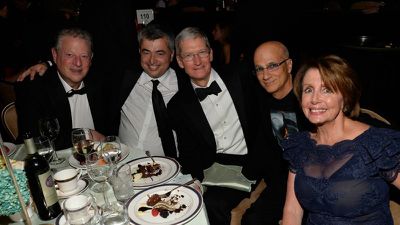 Left to right: Al Gore, Eddy Cue, Tim Cook, Jimmy Iovine, Nancy Pelosi at Clive Davis' pre-Grammy party (Photo via Mashable)
An insider speaking to Billboard claims the Cupertino-based company isn't content just to be in the music business but "to be the music business; it's not to compete with Spotify." Billboard points out that, with new iOS updates in development possibly bringing Beats Music support and the booming popularity of streaming services, the company appears to already be lining up to deal with its digital music problems head-on.


The proof is in the 800 million credit cards it already has on file -- comparably, Spotify has 15 million subscriptions and 60 million monthly users, although the service is growing, headed to an initial public offering.

In fact, integration has begun. Apple TV features a Beats logo, an update to Apple's iOS will include streaming and creative is in the works for new ads starring artists recruited by Iovine. But that may be the extent of Beats' involvement as Kondrk takes the lead on music. Like the Apple-centric design of its offices, the look and feel of Beats is likely to mirror Apple's aesthetic, not the other way around.

Other news out of the talks points to a bit of housecleaning in dealing with iTunes itself, with Apple supposedly planning to rid the store of many covers, soundalikes, and re-recordings. Billboard also reports that the featured ticker seen on the iTunes storefront may lose its editorial-chosen feature and become more sales-based.

Additionally, featured-artist sliders, previously chosen editorially, may now be determined by sales velocity, leaving some to wonder if iTunes is becoming less like a Tower Records and more of a Target -- limited selection and a focus on hit titles. "Until now, iTunes has been good to the indies," contends one vet. Conversely, an Apple source says such case-by-case house-cleaning to eliminate duplicative and deceptive versions is routine.

Despite Apple's challenges in a market where third-party music services can operate fairly freely on Apple's platforms, insiders remain optimistic about Apple's plans, with Davis' son Doug pointing out the company's already hugely popular ecosystem of devices and operating systems helping to launch the new service with a bang. "Their streaming service will see a seamless integration that's cross-platform and convenient, as Spotify has become," Davis said. "As a fan of all-you-can-eat, the industry in general is excited to have more market players."


What a gentleman you are!
Score: 17 Votes (Like | Disagree)

Rogifan
Im curious what Al Gore and Nancy Pelosi have to do with music?
Score: 15 Votes (Like | Disagree)

Agent OrangeZ
Respect for Tim Cook down 10% from me after seeing that he pals around with female Hitler....er...um... Pelosi.
Score: 12 Votes (Like | Disagree)

unibility
Hey look it's the inventor of the internet Al Gore and his buddy 'But we have to pass the bill so that you can find out what is in it!!! Nancy Patricia D'Alesandro Pelosi :D
Score: 11 Votes (Like | Disagree)

I guess Al's there, because he founded the internet or was it email - hmmmm - why was Al at the Grammy's?


1. Al Gore sponsored the legislation that founded the Internet. E-mail existed prior to that.
2. Al Gore won a Grammy. I'm guessing this qualifies him, along with being a celebrity himself.

Respect for Tim Cook down 10% from me after seeing that he pals around with female Hitler....er...um... Pelosi.


Hitler? So, do you believe Pelosi committed genocide on a grand scale? Or is it that you believe genocide was not a significant attribute of being "Hitler"?

I'm curious as to which, because to me "Hitler" is nearly synonymous with "genocide." Perhaps you have another take on this Hitler guy.
Score: 10 Votes (Like | Disagree)
Read All Comments