New DisplayPort 1.4a Standard Points to 8K Notebook and All-in-One Desktop Displays in 2016

Along with other upgrades, the new standard will be able to take advantage of more advanced GPU video performance and display technologies, meaning a wider range of computing devices - laptops and all-in-one PCs like the iMac in particular - will be able to produce 8K content sometime next year. 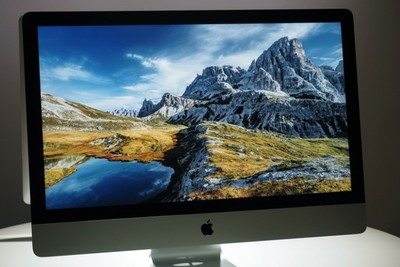 The new standard is for "embedded" panels with the ability to produce up to 8K quality display images, meaning eDP 1.4a won't work with external displays. The current DisplayPort standard is 1.2a, with VESA having announced the next-generation 1.3 standard with 5K support last September.

Full support of DisplayPort 1.3 will, however, need to wait until Intel releases its next-generation Skylake chips late this year or early next year. Apple's current 5K Retina iMac uses a custom solution to manage its 5120 x 2880 display, and 8K displays supported under the future 1.4a standard would come in at 7680 x 4320 pixels.

These higher-resolution displays at 8K should result in a more power-hungry machine, but VESA claims its new Multi-SST Operation will support a Segmented Panel Display feature, bringing lighter, lower-cost display architecture to the new eDP standard. According to Vice President Bong-Hyun You of Samsung Display Co., Ltd., this new strategy can "reduce panel thickness, reduce power draw, and reduce cost."

According to Craig Wiley, senior director of marketing at Parade Technologies, VESA board member, and editor for eDP 1.4a, “The adoption of eDP for embedded displays is now positioned for growth as eDP 1.4a has become highly optimized, especially at resolutions above quad HD. Compared to other embedded interfaces, it has the richest feature set along with the lowest power, wire count and EMI radiation, particularly when used with high-resolution panels. It will continue to evolve, along with DisplayPort, but with its own unique features specifically optimized for embedded applications such as all-in-one PCs, notebooks, tablets and smart phones.”

Currently, only select high-end television support 8K video playback, and the highest quality display Apple device is last year's 27-inch iMac with Retina 5K Display. Though not much content even exists to truly take advantage of an 8K display at this time, VESA's estimate of laptops, all-in-one PC's, and other devices gaining the new standard in 2016 may give enough time for the new technology to grow.

I mean, I get it that 8k is better than 4k, but is this something realistic for a laptop? Put another way, given the distance at which laptops are used and the realistic constraints on their size, does a 15" 8k display even make sense?
Score: 12 Votes (Like | Disagree)

afsnyder
Who else thinks we should have everything Retina before we move up in resolution for those already Retina...
Score: 11 Votes (Like | Disagree)
Read All Comments