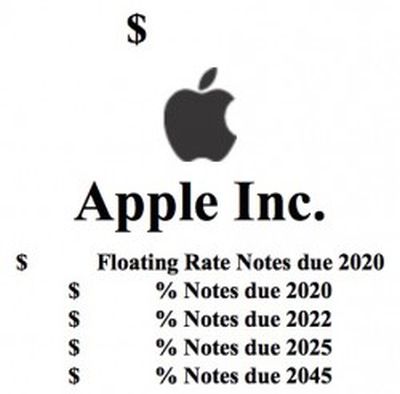 Apple today filed a prospectus with the Securities and Exchange Commission, hoping to sell $5 billion worth of new debt according to reports.

Managed by Goldman Sachs and Deutsche Bank, the offer's monetary specifics haven't yet been revealed by Apple, but the company says the money will be used to cover "general corporate purposes, including repurchases of our common stock and payment of dividends under our program to return capital to shareholders, funding for working capital, capital expenditures and acquisitions and repayment of debt."

As Bloomberg's Lisa Abramowicz points out, much of the proceeds the company receives from the bond sale are undoubtedly going to buybacks and dividend payments.

Today's prospectus comes on the heels of the company's record-breaking earnings for the first fiscal quarter of 2015, posting revenue of $74.6 billion in the quarter, and subsequently seeing a noticeable bump in shares of its stock when the market opened last Friday.

While the company holds roughly $178 billion in cash and marketable securities, much of that cash is held outside of the United States and would currently be subject to significant taxes if brought back to the U.S. to be used for stock buybacks and dividends. As a result, Apple has been pursuing bond sales at very favorable interest rates as a cheaper means of funding these initiatives, repaying the bonds from ongoing operations over time.

Update Feb 3 4:52 PT: The Wall Street Journal reports that Apple has increased the size of its bond deal to $6.5 billion.

Shadow Runner
Apple is not being "greedy" (or any company) they are doing what they need to to stay competitive. The U.S. government needs to change to allow companies to bring money and business back into the country favorably. It's a global economy and the U.S. just needs to stay competitive.
Score: 18 Votes (Like | Disagree)

I can't wait until they start scrambling all of their cash to get it back home when the White House passes the Bill taxing at a 14% rate any money kept overseas.


You're very confused if you think the White House passes bills. Obama proposed a bill, but given neither house of Congress is held by Democrats, I doubt there will be any traction on it. It's nothing but rhetoric and politics from Obama.
Score: 10 Votes (Like | Disagree)

SoAnyway
Lowering taxes in order to "stay competitive" is nothing more than a race to the bottom.

Companies like Apple need to pay the country that they base themselves out of, use its resources, and proudly call home no matter if the money is made overseas. Not doing so only cheats the US tax payer on top of the subsidies the already enjoy.
Score: 8 Votes (Like | Disagree)

wolfaaron
I can't wait until they start scrambling all of their cash to get it back home when the White House passes the Bill taxing at a 14% rate any money kept overseas. These greedy companies love it when the tax payer bails them out or when they help them with their infrastructure. But when it's their turn to pay their taxes, theyre good at hiding it.
Score: 8 Votes (Like | Disagree)

Since when does the executive branch pass bills? My copy of the U.S. Constitution says Congress passes bills and the president can either sign or veto.

And the 14% isn't the final#. Even the WH said it's a "starting point" for negotiation w/ Congress. IF their is an agreement it's likely to be 10% or below. But there are many in Congress who want comprehensive corporate tax reform, not piecemeal and won't agree on any % unless it's part of a complete modernization effort.

Everybody in Washington says comprehensive tax reform is an urgent necessity, yet they have been saying this for years without doing anything.

You're very confused if you think the White House passes bills. Obama proposed a bill, but given neither house of Congress is held by Democrats, I doubt there will be any traction on it. It's nothing but rhetoric and politics from Obama.

It's all rhetoric and politics from everybody, period, full stop.
Score: 5 Votes (Like | Disagree)

Lowering taxes in order to "stay competitive" is nothing more than a race to the bottom.

Companies like Apple need to pay the country that they base themselves out of, use its resources, and proudly call home no matter if the money is made overseas. Not doing so only cheats the US tax payer on top of the subsidies the already enjoy.


Apple pays all applicable taxes with their associated U.S. operations, including employment, local and other taxes.
Score: 4 Votes (Like | Disagree)
Read All Comments