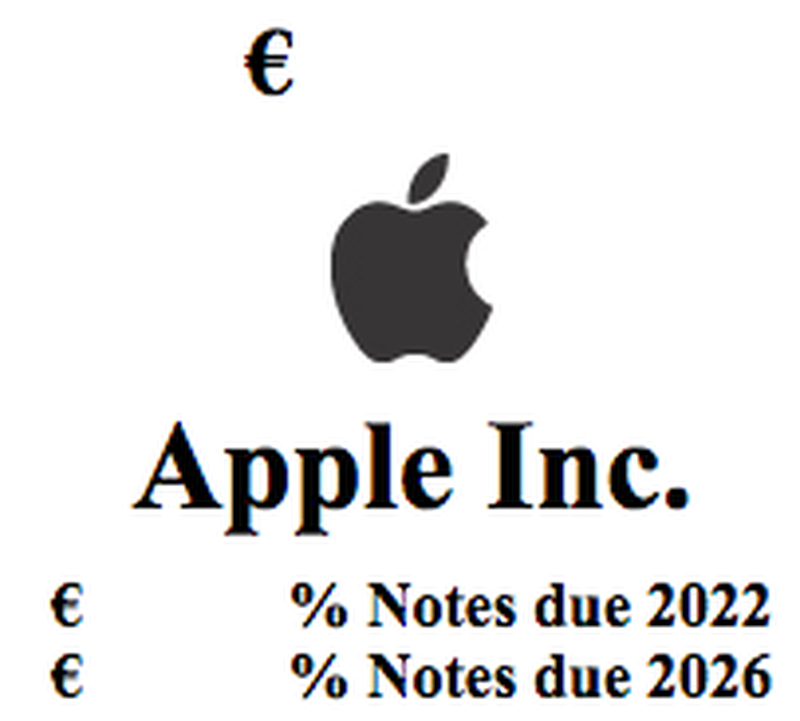 Following yesterday's report that Apple was preparing to hold a new bond sale that includes a component denominated in euros, the company today filed a prospectus with the Securities and Exchange Commission outlining its general plans, which include two chunks of debt with staggered maturities. The Wall Street Journal has more details on the prospectus and how its yields will be the lowest ever for 8-year and 12-year debt:

The iPhone maker is seeking to raise at least €1 billion ($1.2 billion) from two chunks of euro debt maturing in eight and 12 years.

Those would beat the lowest yields ever paid for euro-denominated, corporate bonds of these maturities, according to Dealogic data, reflecting solid confidence that the bonds represent a safe bet. Bankers managing the bond sale suggested the eight-year notes will give investors a yield of roughly 1.1% and the 12-year notes around 1.7%.

Apple spoke with investors on Monday about issuing bonds and will use the proceeds of the sale for general corporate purposes, including share buybacks and dividend payments.

This would mark first time that Apple would begin issuing bonds in euros, with Deutsche Bank and Goldman Sachs arranging the sale. This past April, Apple held a $12 billion bond sale, which followed a record $17 billion sale last year. Apple's bond offerings are a part of its expanded capital return program, which primarily involves a major stock buyback program and a quarterly dividend that aims to return more than $130 billion to shareholders by the end of 2015.

Update: The Wall Street Journal has revised its article to note Apple is actually looking to raise €2.8 billion ($3.5 billion) in the bond sale.

Euro? Bit risky with a currency that almost bankrupted itself?


Obviously you were just trying to be clever and don't know much about finance.

If you assume the Euro might be worthless soon, then taking debt in Euro is not a risk. As the Euro falls, your debt (measured in USD) decreases.

The risk, however, is that the Euro is somewhat low at the moment. If it gains (the USD falls), the debt will increase.

Generally speaking, EUR/USD is somewhat stable, though. It has been circling 1.30 EUR/USD for a decade.
Rating: 18 Votes

syklee26
Can I buy the bonds with Apple Pay?
Rating: 6 Votes

Euro? Bit risky with a currency that almost bankrupted itself?

You mean that currency that was designed to be 1:1 to the US$, but dropped to $0.8 after its introduction and then climbed to be over $1.50. And then in the American induced crisis went down to fluctuate mostly between $1.30 and $1.40? That currency?

So the question is: Why would anyone buy it from them if inflation will make you lose money?


So I'm guessing that you don't have any money that is saved in a Money Market account, a savings account, or a checking account that pays interest? What about CDs? All of these will not make money over inflation (in a typical inflation year - obviously not when it's 0%), yet people keep their money in them due to the fact that they are safe and liquid.

Buying these bonds, while they may not be as liquid, is a safe investment that could be sold before maturity if needed. You get a better rate with these bonds than the majority of accounts that are available that I listed above.

Personally, I agree with your statement that I wouldn't buy them just because I prefer riskier investments but there is definitely a place in the market for these and they will be bought up quickly when they go to market.
Rating: 3 Votes

Whenever I hear of anything relating to financial strategy I immediately imagine that locust whispering in the boards ear.
Rating: 2 Votes

what is the benefit of buying these bonds for such a long time when in 12 years the inflation will depreciate it? ie. if i buy 1000EUR today and will get 1000EUR in 12 years then the value i can buy wit it will probably be something like 800EUR.
Or is the interest on those so high that I will actually profit from it?
Can someone with more knowledge give me little bit of a clarification so I can learn, please?
Thank you

The interest rate was 1.1 or 1.7% depending on the term according to the article and summary. So, the rate is quite low, and probably won't even cover the inflation rate.

You are correct though, it makes little sense to buy the bonds for the average person, but lots of sense for Apple to issue these. They get 1000 Euro today and get to repay 800 Euro in the future.
Rating: 2 Votes

whooleytoo
I wonder if anyone in Apple even remembers what "cash flow problems" means. I go to the ATM, and it just laughs at me. Apple heads over to Europe to pick up 1.2billion on a whim. I wonder what happened? They impulse-bought a small South American country but forgot to bring their wallet?
Rating: 2 Votes

The thing is, you have to look at "the inflation thing" and "the interests rate thing" (the investment) as two separate things.

Yes, as time goes by, inflation will shrink the purchasing power (real value) of your money...so if you have money in the currency were the inflation is happening, you will get hit by that shrink in purchasing power - no matter what.

But! If you have spare money, you can at the same time ("as time goes by") invest that money in something and get a return (an interest rate). Normally you would like to see, that you get a higher return on your investment than what the inflation takes from your investment deposit by shrinking the purchasing power of your money.
But, when rates are low, and/or investments are with very low risk, then the return on the investment can be lower than the inflation. That sucks...but!

It can still be a good idea to make the investment, since if you dont, your money will (by lying under your pillow) loose value equel to the inflation. By investing you can offset some of that value loss, and its better to earn a small rent than not to earn anything at all.

Does it make sense?

(Sorry if my english is not perfect. Its not my first language)

Yes it does, thank you.

I guess it can be "safe bet" for those that don't like the risk of other investments :)
Rating: 1 Votes