The latest numbers from Strategy Analytics reveal that Apple tied Samsung during Q4 2014 to become the world's largest smartphone maker based on global shipments. According to the report, both Apple and Samsung shipped 74.5 million smartphones during the three-month period of October through December.

Apple's number is an official figure from its financial results, while Samsung's number is an estimate since the company stopped reporting smartphone shipments a few years ago. The research firm adds that Apple and Samsung were last tied in smartphone market share in Q4 2011. 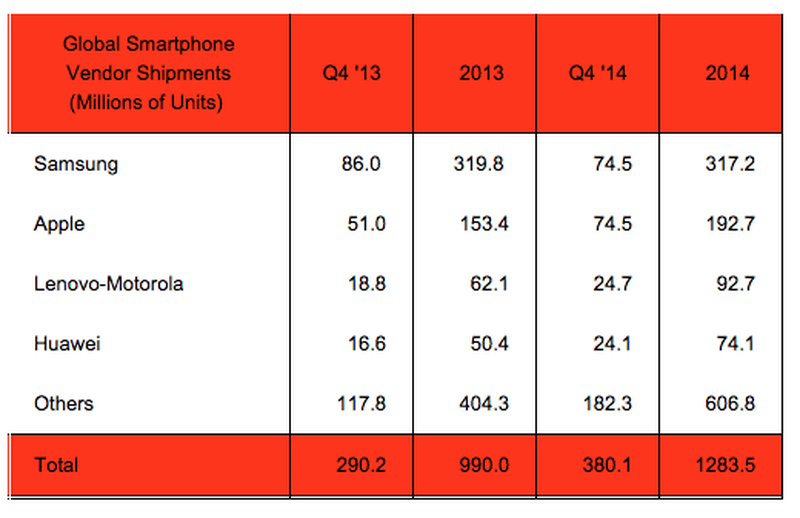 Apple experienced a record-breaking first quarter of the fiscal year because of strong demand for the iPhone 6 and iPhone 6 Plus. The larger screen sizes of the two new smartphones has been a major selling point for many consumers, attracting more new customers and Android converts than ever before. Meanwhile, Samsung reported a 27% quarterly decline in earnings earlier today amid tough competition from both Apple and up-and-coming Chinese rivals such as Xiaomi and Huawei.

Strategy Analytics claims that global smartphone shipments grew 31% annually to eclipse a record 380 million units in the fourth quarter. An estimated 1.3 billion smartphones were shipped worldwide in 2014, with strong growth in emerging markets such as China, India and Africa. Apple has experienced a lot of momentum in China, noting that its online sales in the region for 2014 were more than the previous five years combined.

Update 7:41 AM PT: IDC is now reporting similar numbers for Q4 2014, although the firm gives Samsung a slight edge with 75.1 million units shipped.

furi0usbee
The only question is... on what date will Apple become the first trillion dollar company.
Score: 23 Votes (Like | Disagree)

wesley96
Eight years ago, Apple wanted to take 1% of the smartphone market with the iPhone.

It's now competing for 2nd place in the entire mobile phone market. And in the smartphone market, it's tied with the phone vendor that makes models for every segment of the market, with just a handful of models that are/were mostly top of the line when they originally came out.

Who thought a decade ago that Apple would be such a game changer in the mobile phone industry? Makes me think that Motorola ROKR (this came out in 2005) was just a clever ruse to let everyone get their guards down.
Score: 19 Votes (Like | Disagree)

Richardgm
When it comes to smartphone sales take anything that mentions Samsung with a grain of salt.

Yeah, looks like Samsung is really on their way out to me...


Eventually you will give in and write something positive about Apple. :D
Score: 9 Votes (Like | Disagree)

inkswamp
No surprise. My wife and I both upgraded to the iPhone 6 a couple months ago and Apple absolutely knocked it out of the park with these. The iPhone 6 is proof that the post-Jobs Apple can make great products.

Anecdotally, I've never seen an iPhone release (except maybe the first one) that had so much buzz. I've been asked about it by so many people and I'm seeing a lot of Android switchers.
Score: 7 Votes (Like | Disagree)

The end of competition, yay


I don't know about you, but I can't wait until Apple is the only tech company in the world. I personally will be beaming with pride when everyone on the planet has an iPhone. :eek::D:D
Score: 5 Votes (Like | Disagree)
Read All Comments

Friday May 22, 2020 3:58 pm PDT by Juli Clover
An app bug is causing some iOS users to be unable to open their apps, with affected iPhone and iPad users seeing the message "This app is no longer shared with you" when attempting to access an app. There are multiple complaints about the issue on the MacRumors forums and on Twitter from users who are running into problems. A MacRumors reader describes the issue:Is anyone else experiencing...
Read Full Article • 120 comments

Wednesday May 20, 2020 10:00 am PDT by Juli Clover
Apple today released iOS and iPadOS 13.5, major updates that come more than a month after the launch of iOS and iPadOS 13.4.1. iOS 13.5 is a major health-related update that brings many features related to the ongoing public health crisis. The iOS and ‌‌iPadOS‌‌ 13.5 updates are available on all eligible devices over-the-air in the Settings app. To access the updates, go to Settings...
Read Full Article • 224 comments