Capture Any Audio on a Mac With Audio Hijack 3

Rogue Amoeba today announced the launch of Audio Hijack 3 for Mac, which allows users to record audio from any source, including Skype, Safari, or hardware inputs like microphones. As described by the company, "if it can be heard on Mac OS X, Audio Hijack can record it."

Audio Hijack 3 follows in the footsteps of Rogue Amoeba's Audio Hijack, which was first released in 2002, and Audio Hijack Pro, a second version that added additional features and support for various audio plugins. Version 3 of the software introduces a new look and dozens of new functions to make this the most full-featured version of Audio Hijack yet. 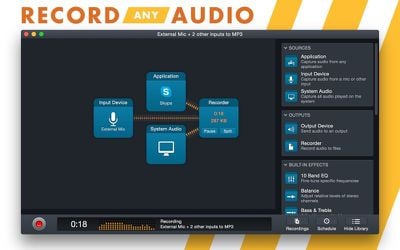 Audio Hijack 3 includes a new audio capture interface, which lets users see the sound as it's being captured using a pipeline-style view that organizes different types of audio into Blocks for full customization.

The most visible change is Audio Hijack's new audio capture interface. The terrific pipeline-style view of exactly how audio flows makes Audio Hijack 3 a snap to learn for veteran and rookie users alike. Different types of Blocks bring in audio from application and hardware sources (Source Blocks), adjust it with audio effects (Effects Blocks), then record it and send it out to speakers (Output Blocks). The fully customizable layout means users can configure the exact pipeline they need, to get the audio results they want.

The app is organized into three sections, including Sessions, Recordings, and Schedule, and Session Templates let users complete common tasks quickly. It's possible to record multiple formats at once, or different sources in sync, and there are simple tools for accessing various audio effects.

Dirty audio can be fixed with Denoise, Declick, and Dehum tools, and there are new preset options for saving configurations. For the first time, Audio Hijack can record in lossless FLAC format and in high-efficiency AAC.

Jason Snell of SixColors and Chris Breen of Macworld have both written detailed reviews of Audio Hijack 3 that are well worth reading to get a solid sense of what's new and how the software works.

Audio Hijack 3 is available for Macs running OS X 10.9 and up. It can be downloaded from the Rogue Amoeba website for $49. New users will need to pay the standard $49 price, but people who purchased an Audio Hijack product in the past can upgrade to Audio Hijack 3 for $25. Customers who purchased Audio Hijack Pro since February of 2014 can download the new software for free.

$50 seems a bit steep for something that just steals music.
If you're going to still music why not use bit torrent? Also there's plenty of blogs that host downloads of music in lossless or FLAC If that's what you want.
Maybe $4.99 ?
There's got to be something I'm missing here

Yes, there is. "Recording audio" and "stealing music" are two completely different things, and this software is not built for the latter.

Baklava
Reminds me of this:

It's not just for stealing music.

I'm a musician. When I do live looping gigs I use it as a "live direct to two track recorder" at 24-bit resolution. It works well for this and I don't have to bring up a giant DAW app to do it which is more of a studio application. This is quick and dirty and easy to get going.

It's also handy to record podcasts that only stream or similar things for archival/reference use.
Score: 3 Votes (Like | Disagree)

jayducharme
I've used Audio Hijack for years. It comes in really handy. I'm not keen on their new interface. What is this current obsession with black windows? I find it much harder to read. I'm hoping they included a way to turn that feature off.
Score: 3 Votes (Like | Disagree)

Yeah, I know. It probably uses some private API or can't get past the sandboxing restriction, or ...