Tuesday December 16, 2014 6:51 am PST by Mitchel Broussard
With the list of Apple Pay-supported companies growing more every week, Apple has revealed that the new mobile payments service now supports cards representing about 90 percent of the credit card purchase volume in the United States. This is up from the 80 percent figure cited at Apple Pay's launch just two months ago.

According to The New York Times, Apple Pay has proven popular with users as the rollout continues. Whole Foods saw more than 150,000 Apple Pay transactions in the first few days after release, and the service accounted for more than 50 percent of McDonald's tap-to-pay purchases in November. 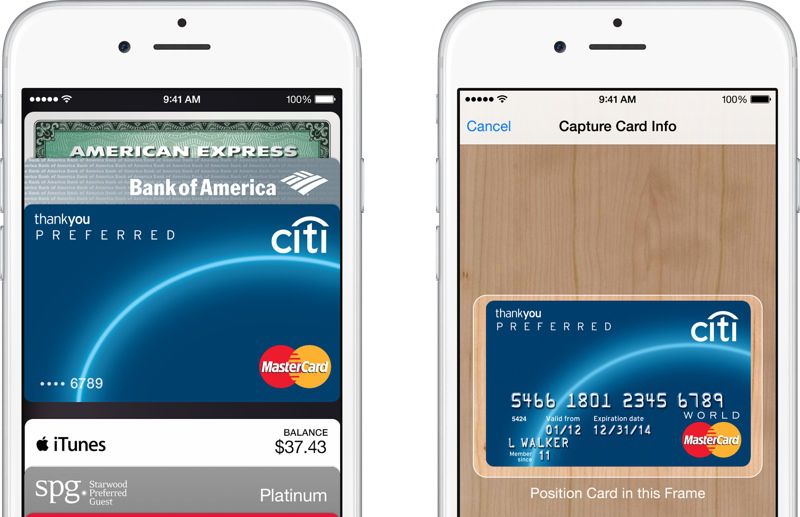 The news comes on the soft launch day of Apple Pay support at TD Bank in the U.S., adding to the growing list of banks supporting the e-payments solution. The U.S. subsidiary of the Canadian bank is just another in a long line of companies with high hopes that Apple's electronic payments solution will be the first widely adopted, according to industry analyst Patrick Moorhead.

“Retailers and payment companies see Apple Pay as the implementation that has the best chance at mass consumer adoption, which has eluded prior attempts,” said Moorhead, president of Moor Insights & Strategy, a research firm. “They believe it will solve many of the problems they had before with electronic payments.”

One of the newest retailers to support the service is Amway Center, the home of the Orlando Magic basketball team, which announced support for Apple Pay will launch officially this Friday. Chief Executive of the Orlando Magic, Alex Martins, remarked that long lines keep customers from buying food at concession stands. He has hopes that, "This, and technologies like Apple Pay, will speed up our service.”

ahh, fail.. that's the thing about bailing out the big banks, they get economies of scale for deploying this tech, and smaller banks/credit unions miss out :/


Freaking Discover card is not supported. It's on Discover of course.
Rating: 7 Votes

Good User Name
My credit union is not among this 90%.
Rating: 7 Votes

the service accounted for more than 50 percent of McDonald's tap-to-pay purchases in November.

It takes a company like Apple to come into this market and shake the whole thing up. They've made a service & they've made it right first time. That is the key to success to Apple Pay.

Apple Pay is not available in the UK yet. Maybe Apple lacks the bandwidth to roll this out in more than one country at a time?


Probably nothing to do with bandwidth. Payment processing is a minefield & it requires the co-operation with banks, merchants & acquirers. Probably just the fact that deals haven't been signed. I heard February 2015 though somewhere, not sure how true that is.
Rating: 6 Votes

ail.. that's the thing about bailing out the big banks, they get economies of scale for deploying this tech, and smaller banks/credit unions miss out :/


Smaller banks and credit unions usually outsource their credit card processing to someone else. It's just a matter of time until those vendors support this.

The smaller banks and credit unions have to demand it -- a lot of them fell behind in the rapid shift to internet banking, and I don't think they want to repeat that.

I agree. Even the retailers that supposedly accept Apple Pay, do so halfway. That is, you still have to enter a PIN or sign a screen. The only place I've truly been able to use it without anything more than my fingerprint has been Panera. Wegmans required a PIN and Macy's required a signature.


From the terminal's point of view, your phone is just a contactless card. It doesn't know anything about your touch ID. You'll have to enter a PIN if you press the debit button. And, you will still have to sign if you press the credit button (unless the merchant has dispensation to skip that step).

As the US switches over to chipped cards, the card will have the ability to specify the allowable authentication methods. For most US cards, it will be signature first, then PIN second (if at all). Hopefully, there is already a device authentication method (like Touch ID), which effectively says: I've already authenticated the user. If the iPhone can use that, and terminals be programmed to recognize it, you wouldn't have to sign or enter a PIN.
Rating: 5 Votes

cjc2104
I live in NYC and almost every credit card machine has NFC capabilities. I use it everywhere: cabs, grocery store, duane reade, CVS.. oh wait... not CVS ;) But in all honesty it is really convenient and works flawlessly
Rating: 5 Votes

Cayden
Hopefully discover gets support soon. I know the CEO said they were discussing it, but when will it roll out?! My bank isn't supported yet either, but at least they have announced that they have a deal with Apple and its just a matter of time now.
Rating: 4 Votes

It is pretty much useless to me. None of the retailers that I use on a regular basis supports it. Where is Kroger, Trader Joe, Home Depot, Lowes, gas stations?


Again, business don't have to support ApplePay. They just have to have a contactless payment system and it will work. That is of course not the case with CVS and Wal-Mart who have intentionally turned theirs off to avoid this "work around".
Rating: 3 Votes

mbc2237
Now retail stores need to get on board. The only place I have been able to use it so far, is Walgreens. And it worked great! Wish I could use it at more places. The banks got on board quickly, hopefully the POS systems aren't far behind.
Rating: 3 Votes