Though Apple acquired its own headphone brand with the purchase of Beats Electronics earlier this year, the Cupertino company is demonstrating that there's still room for competitors in its Apple Store with the new addition of premium headphones by Master & Dynamic.

In a July post, Forbes profiled Master & Dynamic's headphones, labeling them "the Anti-Beats by Dre." Rather than aiming for a more modern look with a bass heavy sound and flashy advertising, Forbes says Master & Dynamic headphones have been designed with a classic style, a focus on music, and a desire to provide a quality product for a niche market. 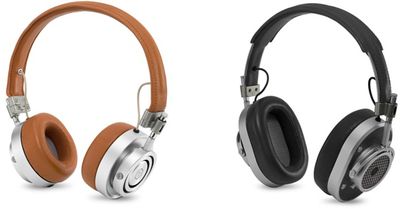 The niche that Jonathan Levine, the company's founder and CEO, saw was that Beats had blown open a massive market, but left a huge hole between premium headphones that prioritized style and those that focused on audio quality. Master & Dynamic seeks to wed design and quality in a way that attracts both audiophiles and users who wear their headphones as an accessory.

Master & Dynamic headphones, which are new to the market this year, have gotten largely positive reviews from music-focused publications, being lauded for their sound quality and their comfortable design, which includes earcups with calfskin and lambskin. One reviewer compared the headphones to the Parrot Zik, another set of high-quality headphones that have received excellent reviews.

In October, Apple removed Bose headphones from its Apple Stores, a move that some chalked up to Apple's reluctance to sell a product that competed with its line of Beats headphones, but Bose products began returning to the Apple Store earlier this week. It remains unclear why Bose headphones had been removed from Apple Stores, but it may have been related to a now-settled patent infringement lawsuit Bose levied against Beats.

Most Bose headphones have not yet returned to Apple's online and retail stores, but it is possible they'll be re-added in the near future. Though Apple has placed a heavy focus on Beats headphones, giving them a prominent place both in retail stores and online, Apple has shown few signs of cutting out all competition.

That is an excellent, and unexpected, sign of reasonableness on Apple's part. As a seller of quality equipment the Apple Store would do well to offer several lines of quality headphones.

remove if they start selling...

See Apple finally gets how headphones should look and sound.

My god, what is wrong with you people!? Did any of you even bother to use the slightest bit of critical thinking skills, let alone read the entire article?

I'm sorry but, any time I see an article written by Juli Clover I know it's going to be a complete NON-STORY!

She wrote as if Apple only sells Beats and now they graciously added a competitor, and all of you I've quoted are acting like it's the greatest thing since sliced bread... but if you read down a little farther you see Miss Clover invalidating her own story with the following "... the company continues to sell a range of other headphones from companies like Bowers & Wilkins, Alpine, Parrot, SMS Audio, Marshall, Denon, Sennheiser, and more."

So the gist of the "story" is, Apple sells (and have always sold) a bunch of headphones, including their recently acquired Beats, and now they've added one more brand in their already healthy line up of competing brands... Wow, stop the presses! :rolleyes:
Score: 14 Votes (Like | Disagree)

Critical thinking would suggest that based on the two headphones appearing in the article we are talking about premium headphones. My Apple Store has a lot of cheapie stuff but not a very good selection of higher-quality headphones.

I'm sorry, let me simplify it for you...

ayale99
Makes sense. These are products for two different target markets. Beats are for people who have no clue about audio quality and more interested in a fashion statement because they saw a celebrity on TV wearing them. Masters & Dynamics, B&O, Bowers & Wilkins, etc are for people who know what good audio quality is.
Score: 8 Votes (Like | Disagree)
Read All Comments

Monday September 26, 2022 7:34 am PDT by Sami Fathi
Today marks exactly two weeks since Apple released iOS 16 to the public. Besides the personalized Lock Screen, major changes in Messages, and new features in Maps, the update has also seen its fair share of bugs, performance problems, battery drain, and more. After major iOS updates, it's normal for some users to report having issues with the new update, but such reports usually subside in...
Read Full Article • 183 comments