In a brief interview with Bloomberg Businessweek as part of highlighting Apple's #10 ranking on the magazine's list of "The 85 Most Disruptive Ideas in Our History", Apple co-founder Steve Wozniak discusses a handful of topics related to the company, mostly relating to Apple's early days. Among the topics Wozniak delved into was Steve Jobs' mindset in those early years of the company.

He had always spoken about wanting to be a person that moves the world forward, but he couldn’t really create things and design them like I could. Steve wanted a company real badly. His thinking was not necessarily about what computers would do for the average Joe in the average home. Steve found the words that explained what these computers would do for people and how important it was a little later in life.

Wozniak went on to mention his refrain from conflict, and that Jobs "was going to make sure that his position was strong and forceful and heard by others." He continued, "Thankfully he had the best brain. He usually had a little, tiny suggestion, but almost always he was right." 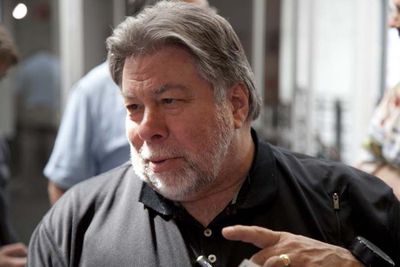 (Photo by Jonathan Zufi)
Discussing the onset of the "computer revolution", Wozniak said he "knew that the computer was so far ahead of anything the rest of the world had seen. We knew we had a revolution. Everyone who joined Apple, this was the greatest thing in their life." Wozniak said that compared to every computer that came before it, the Apple I (which now sells for over half a million dollars at auction on occasion) was the point where he saw the future of widespread, affordable computing devices.

When asked where most of the work was being done in those early years, Wozniak mentions his cubicle at Hewlett-Packard in Cupertino, not the famous location of Steve Jobs' family home that is now a historical landmark.

The garage is a bit of a myth. We did no designs there, no breadboarding, no prototyping, no planning of products. We did no manufacturing there. The garage didn’t serve much purpose, except it was something for us to feel was our home. We had no money. You have to work out of your home when you have no money.

Wozniak has been in the news a fair amount in recent months, with rumors swirling about who will play him in the Aaron Sorkin-penned Steve Jobs film that Wozniak is consulting on, and the recent announcement of The Woz, a reality show about the future of technology Wozniak is set to host.

I wonder why Woz is not tired of talking about Steve J. Sure they were friends and such but at some point you just need to put this to rest and stop even if the media still asking for it.


I have many fond memories in my life that I repeat over and over to friends when they ask. Telling these stories make me happy.

I assume the same with Woz and his stories and memories. Why would he try to suppress happiness if someone is interested?
Score: 16 Votes (Like | Disagree)

samcraig
I have no idea where the "hate" is coming from. Especially when some people on this forum have no problem when Walter Isaacson comments to the press about Steve or Apple history/future.

Woz has pretty much every entitlement to speak his mind. He's earned it.
Score: 12 Votes (Like | Disagree)

I wonder why Woz is not tired of talking about Steve J. Sure they were friends and such but at some point you just need to put this to rest and stop even if the media still asking for it.

OMG. Woz let it go. Just ride off into the sunset on your Segway.


whaaa...? this guy was the other major half of the computer revolution. he was there, at ground zero. he built with his own brains and hands the hardware that sparked everything and set this course of history into motion. why should he not talk about it? and why on earth wouldnt you want to hear about it?

You last affected Apple as a company in like 1980, it's time to move on. Exit interview much?

He didn't just "affect" Apple. Without him there would be no Apple.

He designed, and often built, the Apple 1. More importantly he designed the Apple 2. Without that Apple would have been another footnote in a website dedicated to '70s-era microcomputers.

He didn't just "affect" Apple. Without him there would be no Apple.

He designed, and often built, the Apple 1. More importantly he designed the Apple 2. Without that Apple would have been another footnote in a website dedicated to '70s-era microcomputers.

Exactly! Woz can be in the news all he wants. My first computer was an Apple ][e and I wrote my first programs on it and wrote every high school paper on it. I still remember writing the papers in Appleworks and then opening them in another program to spell check, lol.

So yeah, Woz did more for computing in founding Apple than Ive has ever done with all his inane anorexic designs. He also gets credit for recognizing Jobs's genius and engaging in a symbiotic relationship with him. Many engineers might not have wanted to share credit with Jobs and had that been the case with Woz the personal computer might have taken a rather different historical path.
Score: 7 Votes (Like | Disagree)

timborama
OMG. Woz let it go. Just ride off into the sunset on your Segway.
Score: 4 Votes (Like | Disagree)
Read All Comments