Based on information from a press release obtained by Gizmodo, Apple co-founder Steve Wozniak is planning to star in a reality television show where he will co-host with former Mythbusters star Kari Byron. The show will focus on gadgetry and the future of technology. 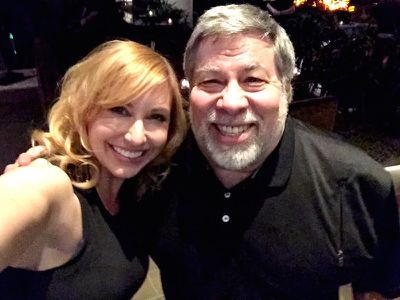 Embarking on an adventure. Like partner my new partner in crime? pic.twitter.com/GwbN5VXZ35 — Kari Byron (@KariByron) November 24, 2014

Said to be titled The Woz, the show will feature Wozniak interacting with and testing futuristic gadgets hands-on. The press release goes on to say that the show "introduces the audience to facilities where science fiction is quickly becoming reality."

Though a Tweet by Wozniak suggests the show was at least pitched to Discovery Channel, little else is known about The Woz at this time.

Welp, I am officially sick of hearing about Wozniak.


The guy singlehandedly developed the Apple I and Apple II computer, and also personally developed the first practical method of generating colour on a computer that didn't cost almost $100'000. He co-founded one of the most profitable companies in history. Namely, the company that this website is dedicated to following.

If you don't want to read about him, fine. But please don't tell us all about how much of a loser he is. He's achieved more than you or me likely ever will.
Score: 23 Votes (Like | Disagree)

The thing is, that certain company became profitable and the most valuable company in the world because of Jobs, not because of him. He was just the tool to get there (in the beginning). Had he in those years been smart enough not just to build tech but also learn something about business from his pal, he'd still be with Apple and could enjoy the fame that he's so desperately trying to get.

This is what annoys me about this dude; trying to get into the spotlight wherever he can and give "educated opinions" about how Apple works, what products they should release next and how they should have done the just released product better. - Nobody cares! He missed the boat, yet he still tries to be part of it all. It's pathetic.

I believe he left apple voluntarily and has frequently stated that he has no interest in running a business. He is still a millionaire and is well known in the tech community.

He will never achieve Jobs' cult status but he is far from pathetic.

His opinions are just as valid as anyone's, it's up to the reader how much weight they are given. He did at least work at Apple for a time, knew Jobs personally and has been part of major engineering projects for Apple, HP and Atari. He is experienced in his field.
Score: 8 Votes (Like | Disagree)

ArtOfWarfare
Kari was always my favorite of The Build Team from Mythbusters.

I don't watch it regularly, but I'm sad that The Build Team isn't part of the Mythbusters anymore. The first few seasons (before The Build Team) were just soooo slow paced compared to when they got added in.
Score: 7 Votes (Like | Disagree)

nunley
This show has potential to be great

Kari is smart and hot. It will be great to see her with Woz.

For those that are opinionated about Woz vs. Jobs... what's the problem? Yes, Jobs was a genius at some things. So was Woz. Why does it have to be one or the other?

I have always seen Jobs as a man who had a great need to impress, and who would never miss an opportunity to enrich himself. He had no qualms about making someone feel small, especially if it made him feel important.

Woz has always been one of the kindest and most honest people on this planet. Not too many people are aware of the depth of his character and generosity. If anything, the man goes to great lengths to avoid credit for this.

Jobs never uttered a word that wasn't calculated and precise. Everything in life was a competition. That is what made him great at leading a company. He had to make tough decisions, and sometimes that requires some ruthless tendencies. I could never see Woz in such a role. Both were required to get Apple launched and to maturity. Neither one of them could have done it alone.

And as for Woz being the inventor of all things computer... let's not be ridiculous. Computers existed previously, to be sure. And, even at Homebrew Computer Club, many other people had the idea to somehow build a computer for personal use that wasn't a silly Heathkit with toggle switches. Woz took it a few crucial steps further. Did he invent the CPU? Of course not. He designed a board that was affordable to build and easy to use. He reduced parts count in ways that nobody had done before. He pioneered the use of regular TVs as displays for computers. He saw the need for simple tools that made this interesting to hobbyists and developers alike.

Both men left permanent marks on our lives. I'm glad we still have Woz here to learn from. Some of the most important things we can learn from Woz are about being human, and not about technology. I hope this show gives us a bit of that.
Score: 6 Votes (Like | Disagree)

maflynn
Cool, I'm glad to see Kari involved in some show, since she was let go from the Mythbusters

I can't wait to see this
Score: 6 Votes (Like | Disagree)
Read All Comments

Thursday January 13, 2022 11:19 am PST by Juli Clover
With the Apple vs. Epic Games lawsuit continuing on, there are no signs that Apple has any intention of allowing popular battle royale game Fortnite to return to the App Store on iPhone and iPad. Epic Games has found a workaround though, by partnering up with Nvidia. GeForce NOW, Nvidia's streaming gaming service, will soon add Fortnite support, allowing Fortnite to be played through a...
Read Full Article • 131 comments