The Los Altos home where Steve Jobs first began building computers may be turned into a protected historical site, reports CNN. Located on 2066 Crist Drive in Los Altos, California, the house was first inhabited by Jobs and his family after they moved to the area when he was in seventh grade.

In the garage attached to the house, Jobs and Steve Wozniak famously assembled the first Apple 1 computers, nine months before the Apple Computer Co. was formed. 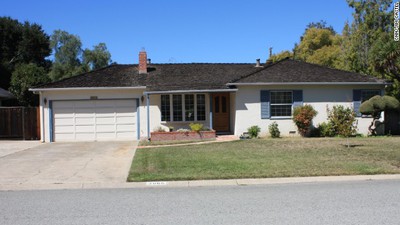 The Los Altos Historical Commission is set to conduct a "historic property evaluation" on Monday, which could see the house preserved indefinitely upon approval.

Another piece of Steve Jobs memorabilia was unearthed over the weekend, with the unearthing of the "Aspen Time Tube," a time capsule that Steve Jobs contributed to during the 1983 International Design Conference.

Jobs donated a Lisa computer mouse used during a famous presentation to the tube, which was lost for several years after landscaping obscured the area where it was buried. In addition to Jobs' mouse, the capsule also included a six-pack of beer, a Rubik's cube, and a Moody Blues recording.

Norcal.
Really? Am I the only person who thinks this is a bit much...?
Score: 30 Votes (Like | Disagree)

Michaelgtrusa
Bless this man he earned this.
Score: 21 Votes (Like | Disagree)

Klae17
I think this idolization of Steve Jobs is going too far. Yes, he changed the world, created new markets, and did great things. He was also many negative things. Time to move on.
Score: 20 Votes (Like | Disagree)

For everyone saying that this is going to far, they aren't making it a religious shrine or into an idol here. They are establishing it as historically significant.

To say that Steve Jobs was not historically relevant is shortsighted and naïve. Steve and his contemporaries changed the world. The Macintosh was the precursor to modern computers - ALL modern computers. This garage is arguably the birthplace, or at least the nursery, for this invention. To recognize it as a historical site is wholly appropriate.
Score: 15 Votes (Like | Disagree)

kkat69
What about Woz's house? He's just as important as he helped kick start Steve into the icon he is and the industries he influenced. Who knows where SJ would have ended up if he hadn't met Woz.
Score: 10 Votes (Like | Disagree)

designaholic
I don't see why this is a bad thing. We honour the birth places, houses etc. of historic people, so why not Steve.
Score: 10 Votes (Like | Disagree)
Read All Comments