Other users are able to play videos, but are seeing a brief error message before a video begins to play, and still other users are getting complete browser crashes when attempting to watch a video. For some users, the problems just started a few hours ago, suggesting the issue may be on YouTube's end. 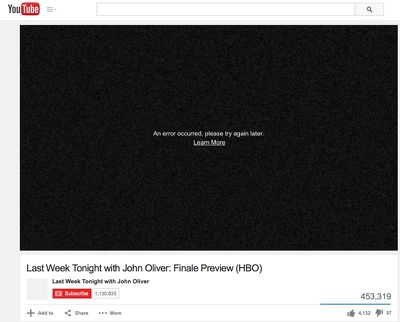 I installed Yosemite on my iMac (20-inch, Mid 2007) when it was first released and I had no issues whatsoever.

MacRumors has confirmed the problem and has also had some trouble loading certain YouTube videos in Safari. Users on the support forums have tried various methods to fix the issue, including resetting PRAM, clearing cookies and caches, but nothing appears to work to fix the problem. One user discovered a temporary fix, going to Develop --> User Agent --> and checking Google Chrome - Mac, but the fix resets when the browser is closed.

YouTube videos appear to be playing fine in both Chrome and Firefox, so a workaround until a fix is available is to watch videos in an alternate browser.

Released to the public on Monday after two weeks of testing, OS X 10.10.1 bundled in reliability improvements to Wi-Fi, Microsoft Exchange, Mail, and Back to My Mac. Apple has already seeded a second Yosemite update, 10.10.2, to developers, but that beta has its own issues, including problems with Chrome, and user reports suggest the Safari error is present on 10.10.2 as well.

Update: Users on OS X 10.10.0 are also reporting the issue, suggesting it is indeed a YouTube problem.

ArtOfWarfare
It seems to me this is almost certainly an issue on YouTube's end, not with OS X or Safari, given a few things that have been mentioned:

1 - The issue started today, not yesterday. If the issue was introduced in the new Safari, it would have started yesterday, when it was released, not today.
2 - The issue is also coming up for people who didn't update to 10.1 yet - people still using 10.0 are also getting the issue. So it definitely isn't caused by the update from yesterday.
3 - Changing the browser agent fixes the problem. All that does is change YouTube's server to treat your browser as if it were a different browser. This doesn't actually change your browser.

So all signs point to YouTube having an issue with processing the agent string of Safari 8. Perhaps they maintain a whitelist or blacklist for which browsers should be able to access YouTube videos, and they accidentally removed Safari 8 from the whitelist (or added to the blacklist)... or perhaps they did it on purpose, to spite Apple and Apple's users. It wouldn't be the first time Google attacked Safari - remember when they exploited bugs in Safari's cookie policy so that they could track Safari user's via their ad network even when users explicitly asked not to be tracked?
Score: 15 Votes (Like | Disagree)

DotCom2
Dear Apple,
I know you don't read these groups (maybe so) but could you please stop putting stuff out that just breaks other stuff? I mean can't you just check it out better first? Hhhhhhhh your reputation is at stake here and I am embarrassed for you. :o I LOVE you Apple but C'mon ppl!
Score: 10 Votes (Like | Disagree)

Dear Apple,
I know you don't read these groups (maybe so) but could you please stop putting stuff out that just breaks other stuff? I mean can't you just check it out better first? Hhhhhhhh your reputation is at stake here and I am embarrassed for you. :o I LOVE you Apple but C'mon ppl!


It really is sad. I can't think of any other time in Apple history they've had so many issues all at one time. iPhones bending, iPads vibrating, iOS 8.0.1 literally ruining devices, poor wifi issues in Yosemite, a buggy, buggy iOS 8, - the list is endless. It's just sad.
Score: 9 Votes (Like | Disagree)

Apple Knowledge Navigator
Glad it's not just me. I've been tearing my hair out!
Score: 9 Votes (Like | Disagree)
Read All Comments