In late October, Apple's VP of iPhone marketing Greg Joswiak sat down for an interview with Re/code's Ina Fried and Walt Mossberg at the site's inaugural Code Conference, answering questions about iOS 8.0.1, Apple Pay, and the Apple Watch.

While we initially covered the interview when it took place, Re/code has now posted the full video footage of Joswiak's appearance at the conference, which is well worth watching for Apple enthusiasts.


During the interview, Joswiak apologized for the iOS 8.0.1 bug that bricked many iPhone 6 and 6 Plus devices, commented on the Apple Pay situation with Rite Aid and CVS, and hinted at possible Apple Watch pricing. 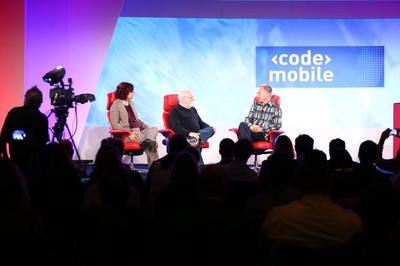 Joswiak's interview occurred at the same time as Tim Cook's October interview with The Wall Street Journal, and a full video of that appearance was also released earlier this week.

mdridwan47
Is there anything worse than recode's video player atm? For a "Tech" news site you'd think they'd hire some decent dev/engineers.. And they don't even upload it to YouTube either.. SMH
Score: 7 Votes (Like | Disagree)

joshwenke
"Joswiak" is derived from the word "Wozniak"
Score: 6 Votes (Like | Disagree)

yea why can't I watch a tech interview with an apple high up, doesn't play on an apple macbook. wtf recode deserve a bashing :mad:


To give it some credit, it did play the advertisement before it stopped. :D
Score: 4 Votes (Like | Disagree)

At least it's someone from Apple, not some guy like U2.
Score: 1 Votes (Like | Disagree)
Read All Comments

Wednesday May 12, 2021 3:54 pm PDT by Juli Clover
In the ongoing legal battle between Apple and Epic Games, the two companies are this week calling up their expert witnesses to argue their points before Judge Yvonne Gonzalez Rogers, who will make a decision in the case after a three week trial. Expert testimony is not as exciting as some of the leaked App Store documents that were highlighted last week, especially as much of what's being...
Read Full Article • 247 comments