Facebook has long had a groups function, where families, clubs, workplaces, and more can band together for a custom sharing experience. The groups feature lets people post and share content that is exclusive to the group, which can be open, closed, or private.

According to Facebook, its new dedicated Groups app is designed to help people "share faster and more easily" with all of their groups, as group interactions are typically buried under other functionality in the standard Facebook app. 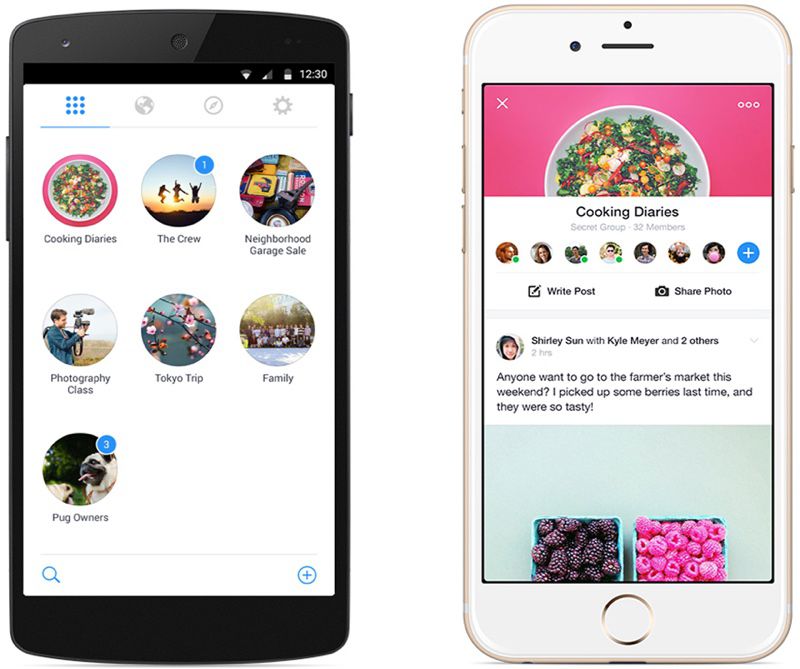 This app gives you a dedicated space for you and your groups.

See all of your Facebook Groups in one place. Discuss, plan and collaborate easily and without distractions. Follow your groups here or on Facebook, whichever is easier for you.

- Create a group for just about anything.
- Share information, post photos and links, and stay in touch.
- Discover and join new groups for whatever you're into.

The main view of the Groups app displays all of a user's groups, with the most recently visited group listed at the top. New groups can be created from within the app with the "Create" button, and the app also delivers notifications on group activity. There's also a discover feature to suggest new groups to people based on pages that they've liked.

While Facebook removed messaging functionality from its main app to redirect its users to the Facebook Messenger app, the company says that groups will continue to be accessible from the main Facebook app as well as the new Groups app.

Facebook's new Groups app can be downloaded from the App Store for free. [Direct Link]

bpeeps
In 5 years, you're going to need a folder just to store all of the associated Facebook apps. I deleted the Facebook app from my phone and use the mobile web version. I go on FB far less now and I have access to messages back. Win win.
Rating: 10 Votes

numlock
have the main apps gotten any smaller now that trend seems to be release every feature as a separate app?
Rating: 4 Votes

xlost6
Facebook has got to be trolling now. This is just beyond ridiculous.
Rating: 3 Votes

JetLaw
"Consolodation" has been a goal and a buzzword for over a decade; meanwhile Facebook is splintering itself into a dozen pieces.
Rating: 3 Votes