Supplies of the 27-inch iMac with Retina 5K display have been slowly dwindling ahead of the holidays, and as of this week, shipping estimates for both standard and custom configurations have slipped to two to three weeks. 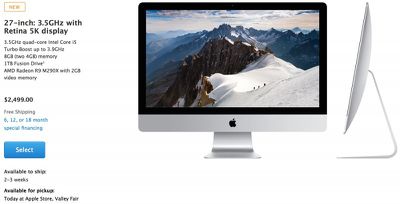 The base Retina iMac, with a 3.5GHz processor, 8GB of RAM, and a 1TB fusion drive, is in stock at many retail Apple Stores around the country and can be picked up same day, but when ordered from the online store, it carries the same two to three week shipping estimate as all custom configurations.

While Retina iMacs ordered from the online Apple Store may not arrive until December, some Apple resellers have available stock that will ship much earlier. Amazon, for example, has the base model in stock available with Amazon Prime shipping and a $50 discount.

MacMall has the base model in stock for immediate shipping, plus the site has several machines with various custom configurations on hand, which it says will ship in five to seven days. MacMall is also offering a discount of $50 on much of its stock.

Other stores like Best Buy and B&H Photo also have the base Retina iMac in stock and available to ship immediately.

Equipped with a 5120 x 2880 "5K" Retina screen, Apple's newest iMac has received largely positive reviews for its impressive display, and configured with a 4.0GHz processor and 32GB of RAM, the higher-end Retina iMac models are able to outperform the low-end Mac Pro.


Mine is playing all my games and running FCP and Premiere juuuuuust fine. Not sure what you're whining about.
Score: 23 Votes (Like | Disagree)

Mine is playing all my games and running FCP and Premiere juuuuuust fine. Not sure what you're whining about.

For windows users (whiner ones), it's not bout how things work together in a nice package. It's about how they look on a spec sheet.


Funny how people assume I'm on a botched up PC since I'm criticizing an apple product.
Score: 10 Votes (Like | Disagree)

Mine is playing all my games and running FCP and Premiere juuuuuust fine. Not sure what you're whining about.


Angry birds HD edition and home-made videos of pet cat? Why don't you do some research on what actually R9 M295X is. Just the concept of a mobile graphics card pushing that many pixels is pathetic. Those crappy cards were a joke before retina iMacs, now it's a full on circus.
And Apple does it because they can. People will still buy those pretty looking iMacs with out-of-date components.

A Ferrari with a Prius engine - at least it moves. Whatever floats your boat.
Score: 8 Votes (Like | Disagree)
Read All Comments