Apple today released iOS 8.0.1, an update that brings several bug fixes to iOS 8, the new operating system released to the public last week. The new version arrives as build 12A402 and can be downloaded via an over-the-air update.

The new update fixes an issue with HealthKit, which prevented apps that support HealthKit from being allowed in the App Store. The problem with HealthKit first came to light shortly before the public launch of iOS 8, and Apple opted to pull all HealthKit-enabled apps from the App Store until a fix was available. Following today's update, apps that take advantage of the HealthKit API will once again be accepted into the App Store.

As noted in yesterday's report on iOS 8.0.1, the update also fixes several other issues with third party keyboards, Reachability, Photo Library, and more. 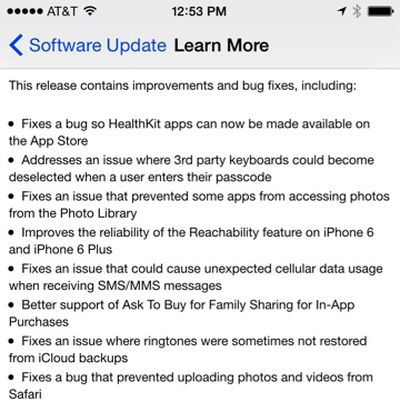 Apple will likely be releasing a second update to iOS 8 in the coming weeks, in order to enable Apple Pay, its mobile payment service expected to be released to the public in October.

Update: It appears that there is an issue with iOS 8.0.1 causing cellular service to be disabled. Many early installers are reporting "No Service" messages after updating. There are also reports of problems with Touch ID.

Great! This should also fix the bending problem too, right? ;)

Even Apple may not be able to solve the problem of a 200 pound butt pressing down on a piece of thin metal.
Score: 33 Votes (Like | Disagree)

ValSalva
Great! This should also fix the bending problem too, right? ;)
Score: 31 Votes (Like | Disagree)

rickdollar
Those who kept the U2 album seem to be doing fine.
Score: 26 Votes (Like | Disagree)

Richardgm
That was earlier than I expected. Good job, Apple.
Score: 25 Votes (Like | Disagree)

Sodner
No cell service but i can faintly hear what sounds like a Chinese lady talking.
Score: 22 Votes (Like | Disagree)

Great! This should also fix the bending problem too, right? ;)

Yup! It adds a layer of Plastic over the screen. :D

That will probably be addressed in 8.1.

Does it fix a bug that makes the iPhone 6 Plus more likely to bend ?

Even Apple may not be able to solve the problem of a 200 pound butt pressing down on a piece of thin metal.

Yeah I hear it also makes the phone waterproof

Does this fix the bendgate issue?

Wow, the third person on the FIRST page to ask this. Let's see how many we get on page 2...

No!, charging mine in the microwave did the trick.

It's not really asking cus it's a joke. But read the forums before you post.


Take care of your $700 mini computer. STOP sitting on it.

And Please use the proper thread for this topic.
Score: 20 Votes (Like | Disagree)
Read All Comments

Friday August 12, 2022 12:46 pm PDT by Juli Clover
Samsung this week launched its fourth-generation foldable devices, the $1,000 Galaxy Z Flip and the $1,800 Galaxy Z Fold. Though there's no sign of a comparable Apple foldable device on the horizon, rumors suggest prototypes are in the works, so we thought we'd take a look at Samsung's newest smartphones to see what Apple needs to measure up to when a foldable iPhone does come out. Subscribe ...
Read Full Article • 312 comments