Wednesday November 12, 2014 7:56 am PST by Kelly Hodgkins
Apple may open a new retail store and corporate campus in downtown Los Angeles, according to a report in Downtown LA Examiner (via ifoAppleStore). The new location would be situated in the historic Broadway Trade Center, which opened in 1908 as Hamburger's Department Store and occupies almost a full city block. Apple's expansion in Los Angeles would be part of a 10-year-long "Bringing Back Broadway" initiative that has been working to revitalize the downtown district by attracting high-profile retailers and other businesses to the area. 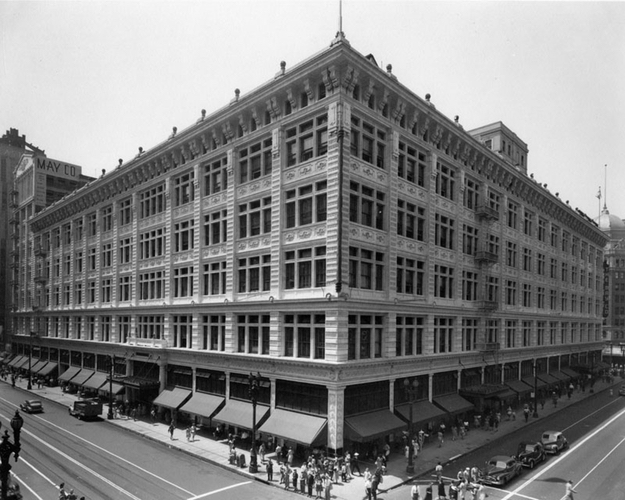 According to the report's sources, Apple has signed a lease for "several hundred thousand" square feet of space in the Broadway building.

Rumors swirling are Apple Corp will have a campus in the building with multiple uses such as office space, residential, and retail. There is also talk of Apple opening up a branch for their recent 3 Billion dollar purchase of Beats By Dre, which is a critically acclaimed subscription streaming music service, which makes the popular Beats headphones, speakers and audio software.

The inclusion of a residential component for the project does not seem to make much sense for Apple, so the mention does draw some skepticism to the entire report.

The rumored campus wouldn't be Apple's first LA location, as the company already operates several retail stores in the Southern California city and its suburbs, and Beats has its main headquarters in nearby Culver City. Apple has been expanding both its retail and corporate presences, opening a number of new stores around the world as well as offices in Seattle, Boston and Cambridge, England.

MartinAppleGuy
I'm expecting a day where every historic building is turned into an Apple Store :P
Rating: 3 Votes

BrianMojo
Please let this rumor be true. It would do wonders for the street.
Rating: 2 Votes

They can be closer to their Hollywood pals.


You're just jealous because you don't have any Hollywood pals :)
Rating: 2 Votes

I dunno, the idea of an Apple Apartment could have some potential. Kind of reminds me of when Disney built their own utopia-ish city down in Florida. They could call it the "iHome". Oh wait...


Again, no. The report does not suggest that Apple has anything at all to do with the residential part of this development. This building has been slated for mixed used (commercial/office/residential) development for many years. If the report is true, Apple would become the lessee for the office and retail component, or at least a big part of it.

Incidentally those who know LA might better recognize this building as the old May Company, the owner before it became the Broadway Trade Center (in the '80s I think).
Rating: 2 Votes

iolinux333
They can be closer to their Hollywood pals.
Rating: 2 Votes


According to the report's sources, Apple has signed a lease for "several hundred thousand" square feet of space in the Broadway building.The inclusion of a residential component for the project does not seem to make much sense for Apple, so the mention does draw some skepticism to the entire report.


The residential component makes perfect sense. According to the rumor, Apple is leasing a part of the building, not buying it.
Rating: 1 Votes

Eduardo1971
Wow, if true this would be the very first Apple store in the heart of the city in Los Angeles.

AdeFowler
Rumors swirling are Apple Corp will have a campus

Pretty sure that they mean Apple Inc. ;)
Rating: 1 Votes

iMaven
Nice building and fits right in with Apple. When is Samsung going to copy this?
Rating: 1 Votes

I'm expecting a day where every historic building is turned into an Apple Store :P


Pretty sure the Louvre is on their list. The glass pyramid would fit right in! ;)
Rating: 1 Votes