Apple is planning an aggressive expansion into the enterprise market, hiring a sales team focused on talking with key enterprise customers, reports Reuters. The sales team may also work alongside "a dozen or so" app developers.

Apple is said to have formed partnerships with several app development startups, including ServiceMax and PlanGrid, both of which build customized industry-specific apps. ServiceMax, for example, already has customers that could be valuable to Apple, including Procter & Gamble and DuPont. Apple is also pursing other relationships with similar corporate app developers, possibly for an initiative aimed at providing custom-made apps for corporate customers. 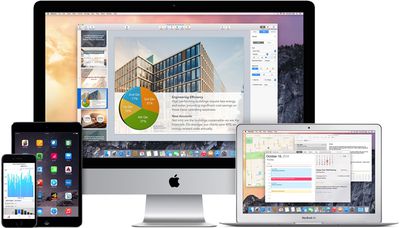 Apps developers and other sources familiar with Apple's plans who could not speak publicly provided additional details on how the iPhone maker is working behind the scenes.

The iPhone maker has worked closely with a group of startups, including ServiceMax and PlanGrid, that already specialize in selling apps to corporate America. The two people familiar with the plans, but who could not speak publicly about them, say Apple is already in talks with other mobile enterprise developers to bring them into a more formal partnership.

In addition to forming partnerships with app developers, Apple is also said to be sending sales teams to speak with the chief information officers of major companies, including Citigroup, which is already in talks to sign up for an enterprise package with Apple.

Earlier this year, Apple announced a major enterprise-focused partnership with IBM, with IBM selling iOS devices to its corporate customers and developing more than 100 industry-specific native apps that are built from the ground up for the iPhone and the iPad in six sectors: banking, government, insurance, retail, travel, transportation, and telecommunications. According to the most recent earnings call, IBM's first apps will be coming before the end of the year. Apple has also developed a special AppleCare for Enterprise, which includes on-site repairs handled by IBM.

Apple's major enterprise push may be an effort to boost flagging iPad sales by attracting a new market and introducing new use cases. iPad sales have been on the decline in recent months, and during its October earnings call, Apple announced sales were down for the third straight quarter in a row.

Enterprise plans their IT purchases years in advance, that's why all major tech companies except Apple try to provide a roadmap of where they're going. Apple's fixation on secrecy means it's a lot more risky for enterprise to invest in them. Buy 1000 Apple Jiggers only to find next year when you're ready to expand the deployment, it's been discontinued and the new one is half the size, 1/4 the performance, 3 times the price, and totally unsuited.

How would Apple like it if Intel wouldn't tell them what chips will be available next month?

I can't wait to hear how these sales drones try to convince corporate purchases to pay the apple tax on extra memory. And explain to them that soldered memory is a good thing because they can save money on not having IT staff do the upgrades in-house.

Everything Apple has done since Timmy took over has made the machines worse for corporate. A smaller box on the desk is just easier to steal and offer no advantage to the company. Trading performance for smaller is just stupid in an enterprise environment.

And how are they going to spin the crippled iWork versions to enterprise users. Switch from Word to a version of Pages that has 10% of the features of the old version for Pages. Just magically awesome.
Score: 13 Votes (Like | Disagree)

Santabean2000
Maybe time for Apple to split itself into different divisions..?

Feel like the original customer base is being further marginalised with all the new directions Apple is going in.
Score: 8 Votes (Like | Disagree)

MacintoshMan
After they abandoned the X-Serve (amazing piece of hardware), I'll never trust them again when selecting them for enterprise desktop.
Score: 7 Votes (Like | Disagree)

RockSpider
I can imagine the sales pitch,"Put your big boy pants on"
Score: 7 Votes (Like | Disagree)

John Purple
Well Apple, if you want to hit the business market then...

... don't let us without our hardware while our macs, pads or phones need repair, (and DON'T make us wait for an appointment at your stores)

... don't change pro software into toys (pages, keynote, numbers and others) leaving us in a complete mess and the urge to switch overnight to other software

... don't feed us with beta versions of your OS while switching off the old versions

...don't bother us with amateur software as mail, calender ...

An enterprise would never install a software that just came out so I don't know what the hell your talking about. Any company who transitions all its software to the new release within one month is purely insane.


But in the Apple universe you're being forced to use the latest software.

Please demonstrate me an Apple supported way to install Mavericks on the new 2014 Mac minis or the Retina iMac...
Score: 6 Votes (Like | Disagree)
Read All Comments