Friday November 7, 2014 2:30 pm PST by Kelly Hodgkins
As forecasted, the third calendar quarter of 2014 was a stellar quarter for Mac shipments, with Apple gaining ground on its competitors in the US. According to IDC's quarterly PC tracker (via Re/code), Apple reached its highest PC market share ever reported, a metric that accounts only for Mac shipments and does not include the iPad.

The company gained ground with 13.4 percent of the US PC market, edging out Lenovo (10.7 percent) to grab the number three spot behind HP (27.7 percent) and Dell (24 percent). Shipments in the US climbed to more than 2.26 million in the third calendar quarter of 2014. 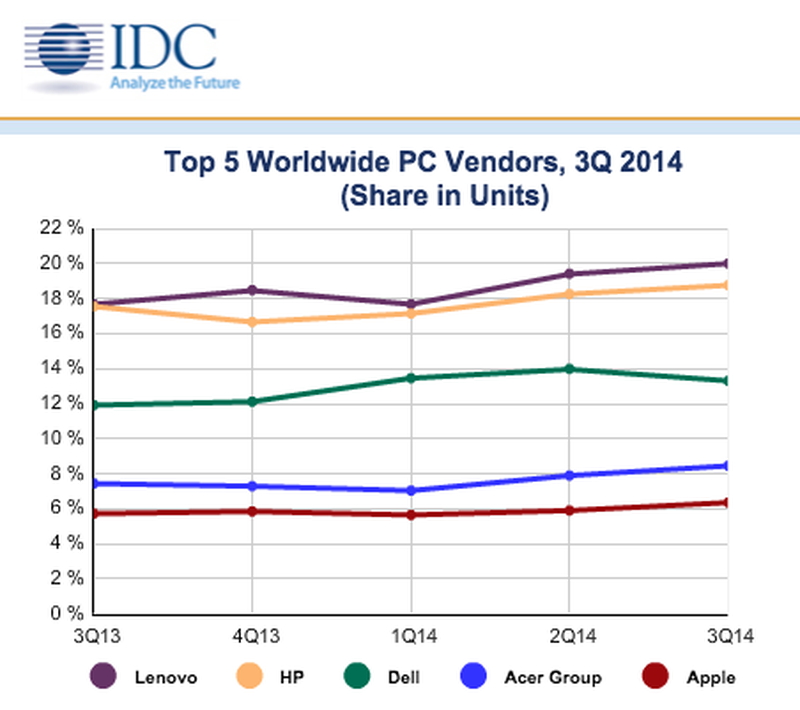 Globally, Apple's market share climbed 5.7 percent year over year, with the company selling a record-breaking 5.5 million units in the just ending quarter. Apple now sits in the number five spot when it comes to global PC shipments, behind Lenovo, HP, Dell and Acer.

Apple refreshed its MacBook Air and Retina MacBook Pro earlier this year with updated processors and other minor improvements. The company also dropped prices on some models and heavily promoted the desktops during the back-to-school season with a $100 gift card along with a discounted purchase price for both students and educators.

Next year may see even stronger Mac sales as Apple prepares to update its Mac lineup with Intel's Broadwell processors. A 12-inch MacBook with an ultra thin chassis, a Retina display, and an Intel Core M chip may be one of the first Broadwell machines to ship in the new year.

But they won't because sky high margins are more important than volume, full model category coverage and affordability for customers.

It's a plan that has worked well for Apple and there is no reason for them to change.
Rating: 16 Votes


The only ways Apple can catch up with others are by coming up with cheaper options and getting Corporate acceptance.
Rating: 16 Votes


Seriously, if I were to look at tablet vs PC usage in college, it would look like the future generations are NOT using tablets. Every single person has a PC. They're not going away, and it's a good thing because tablets suck.
Rating: 15 Votes


Yes, but it's not what Apple wants to do.

These lists count how many computers are sold. Whether the computer is £200 or £2,000 doesn't make a difference, it's one computer. The new Retina iMac starts at £1,999 ($2,499). Apple isn't going to sell gazillions of them. But someone else selling £200 computers must sell ten for every Retina iMac to make the same revenue.

Apple could easily build cheaper computers and sell lots of them. So what good would that do them? None at all.
Rating: 15 Votes

When Apples market share goes down it doesn't matter, when it goes up it's party time.
Rating: 9 Votes

Oh, I was only referring to Jobs saying this (we're entering post pc era) when he first introduced the iPad.

I didn't think there will be a post pc era soon (if ever), and I still think that way.


A PC has far more capability than a large slice of the user base needs, and a tablet has enough. The post PC era isn't that nobody needs a computer, just that we are past the point where a computer is the only way to meet digital needs.

Plutonius
The Mac Mini 2014 should bring them over the top with sales :D.
Rating: 8 Votes

I used to be a PC (not by choice) and replacing them every two years, either some hardware problem or new OS could not handle the older PC.
Not to forget, I have to reimage the PC every year to get rid of junk and bloatware.

I was so frustrated when my expensive HP laptop would crash every 3 months and it was a hardware issue. Did I tell you that it also ran VISTA and corrupted OS during the mandatory security update. I got fusion and migrate to Mac and over a year, migrated the applications too.

Now, my oldest mac, a MBA (i5, 128Gb, 4Gb) is the most heavily used by everyone in the family. Our MBPs are loaded but the 3+ year old MBA with works for everyone except for Photoshop.

The point is that the Macs last long, the OS is robust. There is no need to refresh every couple of years. The batter of My MBA is still good, my $1400 work issued Lenovo need a new battery every year.

The numbers are definitely affected by the fact that people have to buy PCs a lot more often than a Mac. As a user of both the systems, I can tell that Macs are a lot cheaper to own.


If you treat your PC like crap it will be crap.
I installed Vista 64 on my PC in 2008 and if not for a hard drive issue few months ago, I would still be using the same installation. Without any problems requiring fresh installation.
Just stop installing everything under the Sun (ie malware, crapware, god knows what else), make sure to uninstall software before installing a replacement software, etc.

Oh, and while I have stopped using it due to lack of performance, I still have my working laptop from 2002 (Compaq Presario 2716EA) with its original Windows XP installation. Its battery died out about 3 years after I bought it, but guess what, the battery as with 99% of non Apple laptops, is replaceable by the user. As is the hdd and optical drive and memory.
Hell, I can even open a non Apple laptop if I want to clean it from dust and all the crap that gets inside after years of usage. Unfortunately because Apple is going through its anorexic phase and wants to be thinner and thinner and thinner, plus because they rather have you buy a new one than replace one broken part, you cannot do any of them with modern Apple laptops (or desktops now).
That pisses me off.

Apple computers could have been better than they are, with smaller cost too, but they are not. On purpose.
Rating: 7 Votes

Still the pc era if you look at market share and sales within u.s and globally

Oh, I was only referring to Jobs saying this (we're entering post pc era) when he first introduced the iPad.

I didn't think there will be a post pc era soon (if ever), and I still think that way.
Rating: 7 Votes