iMessage and FaceTime Ranked as Most Secure Mass-Market Messaging Options

- Is a message encrypted in transit?
- Is it encrypted so the provider is unable to read it?
- Can you verify contacts' identities?
- Are past communications secure if keys are stolen?
- Is the code open to independent review?
- Is security design properly documented?
- Has the code been audited?

Unsurprisingly, the apps that score highest on the EFF's chart are those dedicated to secure messaging, such as iPhone apps ChatSecure, Signal, and CryptoCat, both of which scored checkmarks in all categories.

Apple's iMessage scored five out of seven checkmarks, earning points for encrypting messages in transit and encryption that's unreadable by Apple, but the messaging app was faulted for an inability to verify contact identities and the fact that Apple's code is not open to independent review. 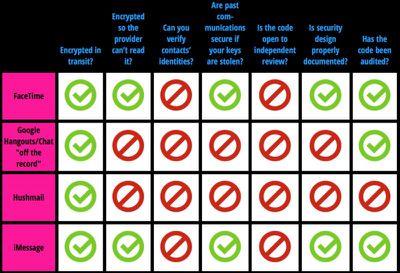 Few of the competing messaging services offer encryption that prevents the companies offering the services from accessing messages, though all encrypted messages in transit. Most iMessage/FaceTime competitors also fail to secure past communications if keys are stolen, and few had properly documented security design. QQ, a highly popular Chinese messaging app, failed at providing any of the qualities the EFF was looking for in a secure messaging app, not even bothering to encrypt messages.

According to the EFF, Apple's iMessage and FaceTime products were the "best of the mass-market options," which is not much of a surprise given Apple's unparalleled focus on user privacy. Apple has a comprehensive privacy site that details all of its privacy policies and the security of various apps and services, including iMessage and FaceTime.

On the site, Apple specifically says iMessage and FaceTime calls "are your business, not ours." The company offers end-to-end encryption and Apple has no way to decrypt it. "Unlike other companies' messaging services, Apple doesn't scan your communications and we wouldn't be able to comply with a wiretap order even if we wanted to," reads the site.

I want synced deleting!!! If I delete a message off my iPhone I want my iMac, iPad, and macbook to have deleted them as well.


Edit: Or at least make it an option as others may like that it doesn't occur that way.
Score: 22 Votes (Like | Disagree)

StarManta
TouchID could be used to fill the holes suggested here.

Imagine this use case: Jane and John both have iPhones and are chatting using iMessage. Jane wants to send sensitive information (boob pics) to John, but wants to make sure that John hasn't handed his phone to his friend Bobby at the time she sends it. She could flag the message as 'secret', and John has to use TouchID or his AppleID password to verify his identity before seeing that message.

farewelwilliams
can we go back to ICQ? good ol' days.
Score: 10 Votes (Like | Disagree)

0xyMoron
What an ugly charts table.
Score: 9 Votes (Like | Disagree)

Huh? I don't understand how whether the security is documented or not actually improves the security.


Because if it is documented, independent parties can find flaws in the design. If it passes, the implementation can still be flawed however.
Score: 7 Votes (Like | Disagree)

The column "Is the code open to independent reviewers", how on earth can the open source community continue to claim that their code is safe and secure because of peer review when HeartBleed and a slew of other major security holes and exploits have been found in open source code and has been their for years or even decades?

Just because a million monkeys review your code doesn't make it secure.
Score: 6 Votes (Like | Disagree)
Read All Comments