The New York Times reports that a working Apple 1 computer has sold at auction in Germany for a record $671,400, breaking the previous mark of $640,000 set last November at the same auction house. That November record has eclipsed an earlier record of $375,000 set less than six months earlier. 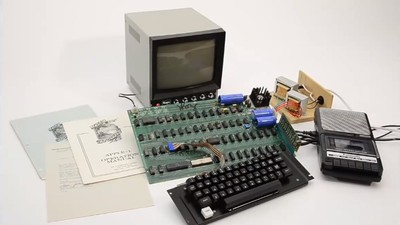 The high prices paid for the machines seem to be explained by the combination of scarcity, a fascination with the early history of the computer age, and the mystique of Apple and its founders, Steven P. Jobs and Stephen G. Wozniak. And some irrational exuberance in the prices, for a machine that can do very little and originally sold for $666 (about $2,700 in current dollars).

“This really confirms the value of Apple-1’s,” Uwe Breker, the German auctioneer, said in an interview on Saturday.

The buyer, Mr. Breker said, was a wealthy entrepreneur from the Far East, who wishes to remain anonymous.


The Apple 1, one of only a handful working units remaining in existence, carries the signature of Apple co-founder Steve Wozniak and was originally owned by Major League Baseball player Fred Hatfield. The auction included a letter from Steve Jobs to Hatfield offering a trade-in deal on an Apple II board, an offer Hatfield declined for unknown reasons. The identity of the owner who put the item up for auction has not been disclosed.

Update: The New York Times now notes that the Fred Hatfield who was the original owner of the machine was not the former Major League Baseball player and instead was a New Orleans resident who sold the machine in non-working condition to a private buyer for $40,000 earlier this year. The buyer repaired the machine and flew to California to have it signed by Wozniak before placing it up for auction.

That's almost a $1 million. Pretty crazy. That computer could buy me a couple of nice cars! :D


It would have been $666,666 in keeping with tradition if the buyer hadn't let the auctioneer persuade him he needed the Monster RS232 cable...
Score: 28 Votes (Like | Disagree)

That's almost a $1 million. Pretty crazy. That computer could buy me a couple of nice cars! :D

BornAgainMac
That is more expensive than having a cup of coffee.
Score: 17 Votes (Like | Disagree)

but can it play Minecraft?


No, but it can play Crysis.
Score: 13 Votes (Like | Disagree)
Read All Comments

Sunday May 9, 2021 2:00 am PDT by Sami Fathi
Zoom, a hallmark platform used by millions during the global health crisis, has been given access to a special iPadOS API that allows the app to use the iPad camera while the app is in use in Split View multitasking mode. This case of special treatment was first brought to attention by app developer Jeremy Provost, who, in a blog post, explains that Zoom uses a special API that allows the...
Read Full Article • 263 comments