Yesterday, Apple launched OS X Yosemite which brought a complete redesign to the OS and a number of features like Continuity, an enhanced Notification Center with widget support, iCloud Drive, and more. A number of developers have updated their apps to take advantage of those new features, and we've rounded up some of the most notable apps for Yosemite below.

Popular password manager 1Password has received a number of new features that integrate with OS X Yosemite including support for Dark Mode, iCloud Drive compatibility for enhanced syncing between devices, and Wi-Fi sync which now works with attachments. The 1Password mini menubar attachment has also been refined, bringing faster access and new shortcuts. 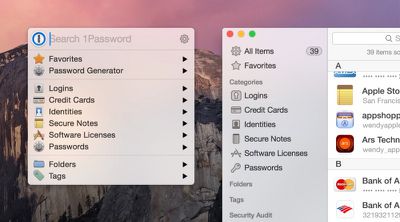 Daft Logic Studio brings its iOS currency converter to the Mac with a flat look that is in line with the rest of OS X Yosemite and a Notification Center widget that can display multiple conversions at once. The full version of Coinverter for Mac will launch soon, and interested users can participate in a free public beta.

To-do app Wunderlist for Mac has received an update to 3.1.0 and brings a number of new features for OS Yosemite, including a custom Today widget in the Notification Center, a custom Share extension that works in Safari, and full Handoff support which allows users to edit lists between devices. The app has also received a redesign that allows for quicker access to list elements.

Read-it-later service Pocket has received an update that now features its own share extension that allows users to save content in a number of apps, and a new design that gives a flat look. The service has also now integrated some of its premium features like full text search and suggested tags, along with a number of improvements like a dark mode for reading.

Developer Junecloud has launched a Mac version of its popular Delivery Status touch app, and features its own Notification Center widget that allows users to track their packages along with the ability to share a shipment over email, iMessage, or AirDrop.

Advanced calculator PCalc is now compatible with OS X Yosemite and includes its own Notification Center Widget to perform calculations, Handoff support, and the ability to import custom calculator layouts created on iOS via iCloud. The newest version of the app also includes new themes, preferences, bug fixes, and more.

Monity is a system monitoring widget made for OS X Yosemite which can be accessed in the Today view inside of Notification Center. The widget can monitor a number of OS X statistics including system uptime, app processes, memory usage, battery life, network activity, and more.

File and screenshot sharing app CloudApp has received a new update for OS X Yosemite which allows users to record their screen at 60 frames a second and a share extension that allows users to share content from their Mac to the service. CloudApp also supports Dark Mode and contains a number of performance improvements.

my mind is blown

Your mind is pretty simple.

The Gadgets on Vista were pretty horrible though, no gesture support, heck, I couldn't even find keyboard shortcuts for them so hiding/showing them was a pain, and they just looked ugly.

Also the whole bit about them being questionable security-wise.
Score: 6 Votes (Like | Disagree)

my mind is blown

The Gadgets on Vista were pretty horrible though, no gesture support, heck, I couldn't even find keyboard shortcuts for them so hiding/showing them was a pain, and they just looked ugly.
Score: 4 Votes (Like | Disagree)

Abazigal
Anyone wishing for a control centre equivalent where we can easily toggle music controls from the notifications panel?
Score: 3 Votes (Like | Disagree)

petsounds
Taking the functionality of Dashboard and cramming everything into a thin vertical strip of screen ranks up there as one of the worse UX ideas Apple has come up with in the past few years. It's a good thing Dashboard still exists in Yosemite. One key-press gives me tons of relevant information at a glance. Notification Center is a square peg shoved into a round hole.
Score: 3 Votes (Like | Disagree)

Watabou
Not sure if I'm allowed to advertise here, but Lyrical is also a Notification Center widget that lets you control iTunes, and shows you song information/lyrics. I just uploaded v1.0.1 with some UI fixes and v1.1 will have Last.fm support, and a much better icon. The current one is a bit ugly I know, I sort of rushed it when Apple announced I can submit my app. :)

Check out the Link to it in my sig.

Oh and also, it's pretty helpful to set a keyboard shortcut for the Notification Center, (I like Option + Space, similar to Command+Space for Spotlight) if you don't want to move your hands away from the keyboard. It's quicker than moving your hand to perform the gesture, imo.
Score: 3 Votes (Like | Disagree)

Disagree. Found myself never using Dashboard but I'm rather enjoying Notification Center. Primarily because it doesn't move me out of whatever app Im using.


You don't HAVE to leave your existing app to use Dashboard.
Go to Settings/Mission Control, find the Dashboard Popup menu (about halfway down the window) and choose As Overlay (rather than the default of As Space).

I don't know if this is the right sort of setting for you, but I find it helpful.
I agree with the original complainer that I tend to have so much stuff displayed in Dashboard that I don't want it all (can't fit it) in a small sidebar, and I don't look at it often, but I do want it all to be there when I do access it.
Score: 2 Votes (Like | Disagree)
Read All Comments