After Apple introduced the new iPad Air 2 at its media event today, members of the press were invited to go hands-on with the new tablet. Several sites have now begun publishing their hands-on first impressions of the iPad Air 2, which we've gathered up below to provide an overall impression of the new device. 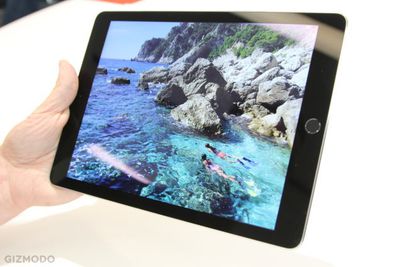 Image courtesy of Gizmodo
TechCrunch says that although the iPad Air 2's resolution is the same as the iPad Air, the display looks better than the previous models. By combining screen components, Apple has made "things look a lot more touchable". The effect is similar to that of the iPhone 6 and iPhone 6 Plus, which makes the display seem like a "high resolution mock-up, rather than an actual display you can interact with and change."

Image courtesy of The Verge
Gizmodo notes that Apple shaving off .04 pounds and 1.4 mm from iPad Air makes the iPad Air 2 feel lighter than the smaller iPad mini 3 even though it's a quarter of a pound heavier than Apple's new 7.9-inch tablet.


Not only is it way, way thinner than the smaller iPad mini 3 — and this will sound crazy — but it feels lighter too. Even though it's nearly a quarter of a pound heavier, the 6.1mm-thin chassis is so thin and easy to lift with a single hand that it makes the mini seem downright fat by comparison. I feel like I could hold it over my head in bed without any worry of smacking myself. Not something I can say about any other 10-inch tablet.

The Verge has similar thoughts on the iPad Air 2's thinness, saying it feels like "there's almost nothing left to take away" and that holding the device is like "you're holding a screen and nothing more." The Verge also noted that the new 8 MP camera is much improved over the iPad Air.

One thing is that is definitively better is the new camera, which is now 8 megapixels; it's a lot faster and shots seemed a lot clearer, at least in Apple's hectic demo room. Apple made a big deal out of this camera and the interesting apps people are building for the iPad that use the camera; we've fought it for years but tablet photography seems to be a thing now.

TechCrunch shares similar sentiments about the iPad Air 2's camera, noting that the camera improvements are good enough to make some consider the tablet as a worthy camera choice.

The Verge also points out that the lack of a mute switch next to the volume rocker feels like a "casualty of thinness", and that although users can mute the device by holding down the volume-down button or lock the orientation in Control Center, the lack of the mute switch makes both things less convenient.

Brian Buttplug
and the question we're all waiting for:

Gudi
Apple totally neglected the iPad mini form factor. The new one has no A8 processor, no 8 mpx camera, is not thinner, not lighter. I bet it even has the same old screen. They added only Touch ID and gold color.

CarpalMac
Really can't see this helping cure the reported market stagnation. Gave me no reason whatsoever to want to upgrade from my Air.

Better camera, seriously? In 3+ years I've not used my rear camera for anything once. I don't speak for everyone obviously, but am I alone? Doesn't feel like it.

Looking forward to more scenes like this though... :rolleyes: 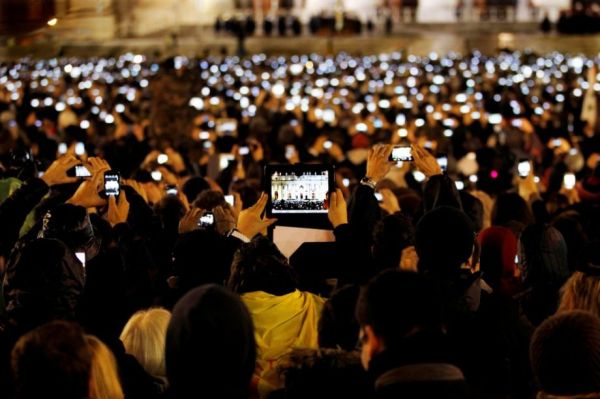 RickInHouston
It's really sad reading comments from bloggers like the Verge, Gizmodo and the like - even when the product is all that and a box of chocolates. I read them knowing nothing negative is going to be said or a backlash from apple will be imposed on them (no more invites, no more first looks and hand's ons).
Score: 14 Votes (Like | Disagree)

PrayForDeath
The absence of the lock/mute switch kills me
Score: 13 Votes (Like | Disagree)
Read All Comments

Saturday February 4, 2023 10:05 am PST by Eric Slivka
Online retailer TigerDirect has slashed pricing on the M1 iPad Air in several colors, offering the base 64GB configuration for just $313.99 in Purple and Pink. Note: MacRumors is an affiliate partner with TigerDirect. When you click a link and make a purchase, we may receive a small payment, which helps us keep the site running. That's a savings of 48% compared to Apple's normal $599.00...
Read Full Article • 432 comments

Sunday February 5, 2023 6:07 am PST by Joe Rossignol
Apple has discussed selling a new top-of-the-line iPhone alongside the Pro and Pro Max models in 2024 at the earliest, according to Bloomberg's Mark Gurman. Based on this timeframe, the device would be part of the iPhone 16 lineup or later. In a September 2022 edition of his weekly "Power On" newsletter, Gurman said there was "potential" for an iPhone 15 Ultra to replace the iPhone 15 Pro...
Read Full Article • 440 comments

Saturday February 4, 2023 1:30 am PST by Hartley Charlton
Google's Chromium developers are working on an experimental web browser for iOS that would break Apple's browser engine restrictions, The Register reports. The experimental browser, which is being actively pursued by developers, uses Google's Blink engine. Yet if Google attempted to release it on the App Store, it would not pass Apple's App Review process. Apple's App Store rules dictate...
Read Full Article • 260 comments