GT Advanced CEO Sold Off Stock Ahead of iPhone 6 Announcement

GT Advanced CEO Thomas Gutierrez sold over 9,000 shares of GT Advanced stock just a day before Apple announced the iPhone 6, reports The Wall Street Journal. The September 8 sale netted him approximately $160,000 at an average price of $17.38, before the company's stock dropped 13 percent to $14.94 on September 9 after it became clear the iPhone 6 and iPhone 6 Plus did not include sapphire screens.

As noted by The Wall Street Journal, though the timing is suspect, the September 8 sale was part of a pre-arranged Rule 10b5-1 Plan enacted in March, according to SEC filings. Along with the $160,000 he earned on September 8, however, Gutierrez sold shares on several other occasions throughout 2014, earning him more than 10 million dollars as GT stock rose on rumors that Apple would use its sapphire for the new iPhones. In comparison, the CEO did not sell any of his shares in 2013.

In a filing, GT said Gutierrez's share sale was part of a pre-arranged plan put in place on March 14, 2014. But there was no obvious pattern to his sales.

In May, June and July, Gutierrez sold shares within the first three days of the month. But then he didn't sell additional shares until Sept. 8, two days after he received 15,902 previously restricted shares. (Gutierrez forfeited the remaining 6,670 shares to cover tax obligations.)

GT Advanced filed for Chapter 11 bankruptcy protection on Monday, promising to continue operations as it goes through a transitional phase to reorganize its business. "Today's filing does not mean we are going out of business," said Gutierrez. "Rather, it provides us with the opportunity to continue to execute our business plan on stronger footing, maintain operations of our diversified business, and improve our balance sheet." 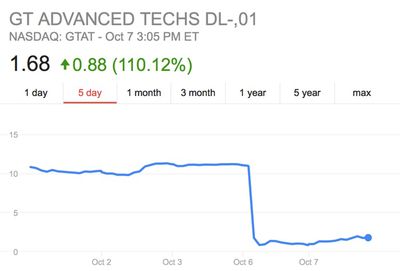 Apple and GT Advanced first partnered in late 2013, with Apple building a 700-employee manufacturing facility in Mesa, Arizona that's run by GT Advanced. The deal also saw Apple funding GT's purchase of furnaces and other sapphire-making equipment through a $578 million loan, doled out over several months and subjected to certain capacity requirements.

Under the terms of the agreement between Apple and GT Advanced, GT Advanced is required to pay back the $578 million loan over the course of five years. If the loan is not paid back, Apple is entitled to the equipment that GT Advanced purchased. When a deal was struck between the two companies, GT Advanced noted that sapphire production for Apple would result in substantially lower gross margins, but was confident that a recurring revenue stream would be beneficial for growth in the long run.

Apple was widely expected to include sapphire display covers from GT Advanced on some iPhone 6 models, and it is unclear why sapphire was not used at all. GT filings did, however, suggest that the company saw poor sapphire yield rates, which may have impacted Apple's decision to stick with alternate materials. Apple is not subjected to any type of commitment to purchase sapphire from GT Advanced, and though the Apple Watch does indeed include a sapphire cover, it is unclear whether the sapphire being used is sourced from GT.

GT's stock dropped approximately 90 percent after the company's bankruptcy announcement and has seen little gain since then.

roland.g
Something tells me the SEC is going to gut him. They should. As an accountant, it is obvious that he had prior knowledge of the upcoming Bankruptcy and iPhone 6 announcement. However, there should also have been provisions against him dumping his stock like this in the stock option agreements and as part of his contract.
Score: 22 Votes (Like | Disagree)

Anonymous Freak
Yes, this smells of "insider trading" - but there is one big caveat...

Officers of publicly traded companies generally (*IANAL) have to report to the SEC that they are going to sell shares months in advance of the actual sale. They don't have to say *WHY* they are going to sell, but they do have to give notice. And that notice is public record. I don't have access to such databases where these are stored (usually they're behind paywalls, and we only hear about major corporate officers sales because there are reporters that dig in to this stuff for big companies - likely no reporter would care about GT Advanced.)

So it is likely that the CEO knew (or at least suspected) that they would be unable to supply sufficient quantities for the iPhone 6 months in advance, and planned the stock sale then.
Score: 14 Votes (Like | Disagree)

AlecZ
sold over 9,000 shares
IT'S OVER 9000!!!! On topic: This is interesting. I still want to see what Apple will use sapphire for after all these rumors (just the watch or the phones too?).
Score: 14 Votes (Like | Disagree)

Isn't this borderline insider trading since he knew the screens weren't sapphire?

That is why people in his position can't trade their company stock any time but only in certain well established windows and with long wait time between announcing and doing it - question is if he followed all those rules
Score: 11 Votes (Like | Disagree)

thewebb
CEOs doing sketchy things... what else is new?
Score: 9 Votes (Like | Disagree)
Read All Comments