iPhone 6 and 6 Plus Models Popping Up in China, Vietnam Ahead of September 19 Launch

Though the iPhone 6 and iPhone 6 Plus are not expected to be delivered to customers and released to stores until Friday, September 19, some devices have already begun showing up in Vietnam and China.

According to Dan Tri [Google Translate] an iPhone 6 and 6 Plus were spotted in a Red River restaurant in Vietnam by an AP reporter, who confirmed the legitimacy of the devices. 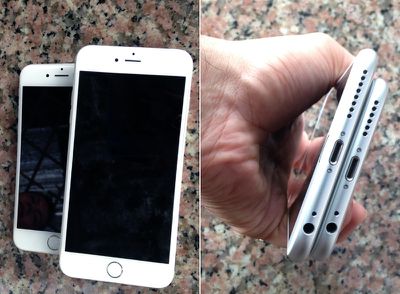 The reporter is said to have tested features like Messages and Siri to confirm that the devices seen in Vietnam were real, and Dan Tri snapped several photos of the two phones. The images show off the size difference between the two models and how the devices fit into a pocket.

Dan Tri also shares some details on the two new devices, suggesting that despite the size increase, the iPhone 6 Plus is comfortable to hold and feels like "a miniature mini iPad." The cameras, though protruding, are not much of a hinderance, and two phones are "fast" and quick to open apps.

iPhone 6 models have also appeared in China, with users on the MacX.cn forums sharing several photos of the devices.

Apple was unable to keep a tight rein on the iPhone 6 and 6 Plus this year, with several parts leaking out ahead of the iPhone announcement. Enough parts leaked, in fact, that Feld & Volk was able to assemble a functional iPhone well ahead of release, and the weekend before Apple unveiled the two devices, a fully functional version of the 4.7-inch iPhone 6 was shared by a Chinese user.

The iPhone 6 and iPhone 6 Plus will be in retail stores beginning on Friday, September 19. Early pre-orders placed on September 12 will also begin arriving on that date, though a few lucky customers often get their devices delivered early due to shipping errors and the logistics of delivering hundreds of thousands of devices simultaneously.

BornAgainMac
This is what that Chinese chick was trying to say during the keynote. That it was going to be released early in China.
Score: 27 Votes (Like | Disagree)

It's almost as if mini is short for the word miniature.
Score: 15 Votes (Like | Disagree)

kmil
I'm sorry but that pocket picture is proof that Bigger is not always better. It looks ridiculous. I have read people saying "Apple is catching up with the 5.5" or "Apple is still behind because so and so has a larger than 5.5" display". This phone is HUGE for small people. At least there is a choice though. 4.7" for me if I get one.
Score: 14 Votes (Like | Disagree)

Monday January 30, 2023 3:43 pm PST by Juli Clover
Apple violated United States labor laws when it sent out an email warning employees about leaking confidential information about the company, the National Labor Relations Board (NLRB) said today in a ruling shared by Bloomberg. Rules that Apple has established around leaks "tend to interfere with, restrain or coerce employees" from the exercise of their rights under the National Labor...
Read Full Article • 177 comments