Apple may be integrating tokenization technology in its forthcoming mobile payments solution, reports Bank Innovation. Citing sources close to the matter, the report notes that the company will look to utilize token technology to address security and fraud concerns as integrates the service with the iPhone 6 and iWatch.

Financial institutions — card issuers and networks — prefer token technology because it replaces primary account numbers, those 16-digit card numbers on the front of credit and debit cards. Instead, the tokenization technology uses complex codes that are easily transmittable over the air and between devices, but that are used only once, so even if they are intercepted, are of no use to fraudsters.

An Apple patent discussing token technology has also been discovered, as the application was granted last month and filed for in 2009. In its example, Apple discusses a token system as a method for two devices to communicate sensitive data with disposable, one-time use codes. 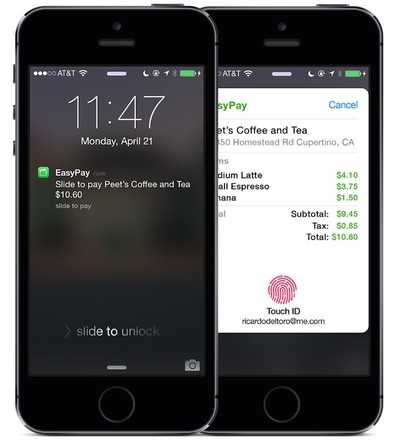 The report also once again discusses the NFC capabilities in the iPhone 6 and iWatch, stating that chip-maker NXP will be rolling out NFC chips to the iWatch and the iPhone 6. Apple Stores and Apple retail partners are also said to be gearing up to utilize NFC technology, as a number of retail locations will be using the NFC-enabled Verifone MX 915 terminal.

Prior reports have stated that Apple's payment service will be supported by a number of credit card companies including Visa, MasterCard, and American Express. The company is also said to be partnering with a number of retailers for the service, including Walgreens, CVS, Nordstrom, and more.

Apple is expected to announce its mobile payments solution at this Tuesday's media event, which will likely be shown off alongside the iPhone 6 and iWatch.

Apple can you please include the sears store. I shop a lot at sears.

tattooedyuppie
1 more day... This is going to be epic on so many levels.
Score: 10 Votes (Like | Disagree)

bradl
Tokenization is one of the best ways to protect PCI data.

Prime example: PCI standards allows someone handling such data to only display the first six and last 4 digits of a PAN (your credit card) in their database. For a merchant to retrieve the full data for research (your full card number), the people holding the data would encrypt the middle digits of your PAN number, create a token, store it in a database with your encrypted card information.

The merchant then would be presented with a token. They submit the token, the entity holding the PCI data has their application check the token against what they have in their database. If they match, the people holding your data returns back the full card number to use. That way, at no point does either the holder or the merchant have all 16 digits of your credit card number.

I've maintained PCI databases, and it's one of the easiest, and secure ways to store your data. For Apple to be looking at this is a good thing, especially if rumors are true about using NFC in their next iPhone.

Jacquesvw
Can tokenization keep my money safe from my wife as well?
Score: 6 Votes (Like | Disagree)

Kebabselector
I misread it and thought it was going to be a Hobbit based payment system, but that's Tolkienization.
Score: 5 Votes (Like | Disagree)

Just to scare everyone, I could easily setup a capture at the fuel pump and grab your swipe. I'm curious on how 'they' can make this secure, possibly include a manual PIN?


You state that you have been writing token payment code for two years, yet you don't know how it can be secure? You mean you write code for a technology that you don't understand?

Friday July 10, 2020 11:12 am PDT by Juli Clover
Apple this month published a support document that warns customers against closing their Mac notebooks with a cover over the camera as it can lead to display damage. Image via Reddit Apple says that the clearance between the display and the keyboard is designed to very tight tolerances, which can be problematic. Covering the camera can also cause issues with automatic brightness and True Tone....
Read Full Article • 323 comments

Friday July 10, 2020 2:58 am PDT by Tim Hardwick
At last month's WWDC, Apple officially announced that its Mac computers will be transitioned from Intel x86 to homegrown Apple Silicon chips. Apple said it plans to deliver the first Apple Silicon Mac by the end of the year and complete the transition in about two years. According to Apple analyst Ming-Chi Kuo, a 13.3-inch MacBook Pro with a form factor similar to the current 13.3-inch...
Read Full Article • 178 comments

Saturday July 11, 2020 1:42 pm PDT by Arnold Kim
Casual MacRumors visitors may not realize that we have a very active PowerPC forum where users discuss issues related to PowerPC Macs that have not been produced since 2006. Threads range from hardware upgrades and software options to nostalgia: Photo by AphoticD Apple's recently announced transition to Apple Silicon (Arm) based Macs raised some interesting questions about future support...
Read Full Article • 83 comments

Friday July 10, 2020 3:33 am PDT by Tim Hardwick
Apple TV+ today debuted "Greyhound," the highly anticipated Second World War movie starring Tom Hanks as a naval officer given command of Navy destroyer Greyhound in the Battle of the Atlantic. "Greyhound" features Hanks as George Krause, who must fight his own self doubts and personal demons as he leads a convoy of Allied ships against German U-boats to prove that he belongs in command. ...
Read Full Article • 62 comments

Friday July 10, 2020 12:01 pm PDT by Juli Clover
Apple CEO Tim Cook was the second highest paid CEO in the United States in 2019, according to Bloomberg's list of the highest paid CEOs and executives in 2019. Cook received compensation totaling $133,727,869 by Bloomberg's count. Almost all of Cook's compensation was provided in the form of stock awards and related performance bonuses. As reported by the SEC earlier this year, Cook received ...
Read Full Article • 112 comments