Several rumors circulating today have suggested that Apple might be planning to somehow involve U2 in the upcoming launch of the iPhone 6. A tipster told MacRumors that the iPhone 6 will come preloaded with the new U2 album, and there's also been some unverified chatter on Twitter from reporters in Ireland pointing towards that possibility.

Most of the rumors seem to come from a recent video shoot U2 did in Dublin, which was conducted in secrecy with "black sheets strategically placed to obscure what was happening from public view." Music promoter Stephen Browne managed to snap a blurry photo of the shoot, and he says the "focus of the 'video' on the bridge last week was a phone." It is impossible to tell what device is depicted in the photo, however, or if the shoot revolved around the iPhone. 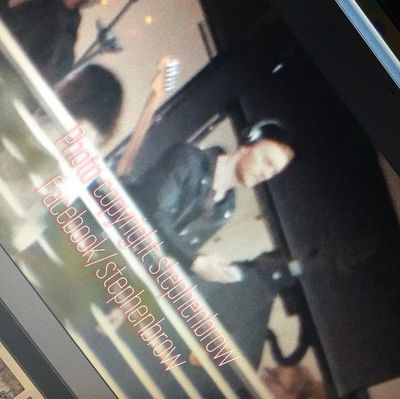 Looks like @U2 new album maybe preloaded on to iPhone6. The focus of the "video" on the bridge last week was a phone pic.twitter.com/CUY4rKTSM9 — Stephen Browne (@Stephenbrow) September 3, 2014

A U2 fan site pointed out by a Reddit user may also be a source of the rumors, as Julian Lennon, son of late Beatles frontman John Lennon and friend to U2, reportedly told the site "I think they are shooting an Apple commercial."

According to CNET's Shara Tibken, it's also possible that Bono might be a "special musical guest" at Apple's upcoming iPhone 6 event on September 9. The event will be held at the Flint Center at De Anza College in Cupertino, and Apple is in the midst of constructing a massive structure on site.

It is unknown what the structure is, but some have suggested it could be a stage. San Jose Mercury News interviewed a Cupertino resident who had been observing the ongoing construction and said "It looked like a sound stage going up for a rock concert behind Flint Center."

Apple and U2 have had a long partnership, as Steve Jobs and Bono were good friends. Starting in 2004, Apple released several special edition U2 iPods, which included the band's signatures and U2's music. Apple has also been a longtime partner of (Product) RED, a charity founded by Bono.

It is unknown if these whispers and hints of a U2 iPhone 6 tie-in and possible performance are accurate, but it appears to be a possibility given all of the circumstantial evidence. Apple has plans to debut its iPhone 6 on September 9, which is, coincidentally, the same day that the first single for U2's newest album is rumored to debut.

Update: According to the Irish Independent, a U2 spokesperson has denied the rumors and speculation.

A spokeswoman for the band said Bono and co have not struck a deal with Apple to release their upcoming album on its next [iPhone.]

"They are not releasing their album on the iPhone, and they are not performing at the IPhone launch," she said.

Update 2: Irish Independent has pulled its article for unknown reasons.

Rocko1
Can't we have the celebrity nude photos instead?
Score: 52 Votes (Like | Disagree)

george-brooks
An album preloaded on the iPhone? What is this, Microsoft?
Score: 36 Votes (Like | Disagree)

aPple nErd
i hope these will be deletable... not part of the firmware or im gonna be pissed.
Score: 34 Votes (Like | Disagree)

luckydcxx
i would rather have an iTunes credit and download the album that I want.
Score: 29 Votes (Like | Disagree)


you have a better chance of seeing Santa Claus give the keynote :p
Score: 19 Votes (Like | Disagree)
Read All Comments