Over the weekend, Apple's chief designer Jony Ive and musician Bono attended the Cannes Lions International Festival of Creativity, where Bono was honored with the LionHeart Award for his work with the (Product) RED campaign to raise money for the fight against AIDS. 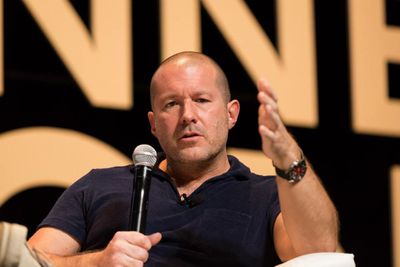 Ive during his interview at the Cannes Lions Festival
During their appearance, Ive and Bono sat down for a 45 minute interview. While the entirety of the interview has not yet been shared, Cannes has posted a short highlights reel, with the first two minutes of the video featuring Bono. In the spot, Bono describes working with Steve Jobs on (Product) RED, recounting a particular conversation with Jobs over the parentheses that are part of the (Product) RED name logo.

Jobs initially wanted to forgo the parentheses to keep anything from "interfering with the logo", but after a disagreement with Bono and some time to sleep on it, he conceded to the parentheses but never in Apple Stores.


As described by Adweek, though Ive and Bono are old friends and Apple has worked with (RED) for many years, Bono went on to complain on stage about Apple's quiet involvement in the project and the company's reluctance to put (RED) branding on products.

Bono went so far as to stand up, pull out an official (Red) iPad cover and remove the device, illustrating to the audience that the only actual nod to the nonprofit was inside the cover and therefore always obscured by the tablet.

"Where's the (Red) branding?" he asked Ive. "Nobody can see that. This is modesty run amok. This is the Apple way. They're like a religious cult."

Ive seemed unfazed by Bono's slights, noting that Apple and Product (RED) have a strong alliance. "We started in 2006 with one (RED) product, a nano, and now we've got well over half a dozen. It's been really, really special for us."

Over the course of Apple's partnership with (RED), the company has released (RED) iPod nanos and shuffles, iPad Smart Covers, iPhone Bumpers, and iPhone 5s cases, with a portion of each sale going directly to the charity.

Last year, Ive even teamed up with designed Marc Newson to create multiple one-of-a-kind products that were auctioned off by Sotheby's, with proceeds going to (RED). A range of items including solid gold EarPods and a red Mac Pro were auctioned, bringing in nearly $13 million.

To date, Apple has raised approximately $70 million for (Product) RED, with 100 percent of that money going towards HIV/AIDS programs in Africa. The full interview may be shared by Cannes in the future, but in the meantime, a slideshow created on Storify gives the highlights of the event.

JoEw
Considering Apple has raised the most money for product red, I don't think he should be complaining.
Score: 45 Votes (Like | Disagree)

LeoNobilis
Bono is an idiot.
Score: 42 Votes (Like | Disagree)

slineaudi
"To date, Apple has raised approximately $70 million for (Product) RED, with 100 percent of that money going towards HIV/AIDS programs in Africa." Stop bitching about the logo, Bono.
Score: 35 Votes (Like | Disagree)

theBostonian
Bono, of course, would know all about cults, especially cults of personality.
Score: 27 Votes (Like | Disagree)

ryansimmons323
You get the guy out to represent the organisation that has given you the most money in donations and then you insult him/them over a logo?

I should think Bono would be the first to point out that it's the donations that matter, not branding.
Score: 22 Votes (Like | Disagree)

unplugme71
Quit bitching. Apple is doing a lot as it is to contribute.

I personally would not have bought my red cases if it had the (RED). Knowing that Apple donated 10% was enough for me to feel I did something to help.
Score: 20 Votes (Like | Disagree)
Read All Comments