Earlier today, Apple issued a press release stating that an iCloud/Find My iPhone breach had not been responsible for the leak of several private celebrity photos over the weekend, instead pointing towards a "very targeted attack on user names, passwords, and security questions" hackers used to gain access to celebrity accounts.

The company did not divulge specific details on how hackers accessed the iCloud accounts, leading Wired writer Andy Greenberg to investigate the methods that hackers might possibly have used to acquire the stolen media.

"Use the script to hack her passwd...use eppb to download the backup," wrote one anonymous user on Anon-IB explaining the process to a less-experienced hacker. "Post your wins here ;-)"

Acquiring just a user name and password allows hackers access to content on iCloud.com, but with the accompaniment of the ElcomSoft software, a complete backup can reportedly be downloaded into easy-to-access folders filled with the device's contents.

According to security researcher Jonathan Zdziarski, who spoke to Wired, metadata from some of the leaked photos is in line with the use of the ElcomSoft software and possibly the iBrute software, which exploited a vulnerability in Find My iPhone to allow hackers unlimited attempts to guess a password. Apple has, however, patched the exploit, and has suggested iBrute was not a factor in the attacks.

As noted by TechCrunch, using ElcomSoft's software to download an iPhone's backup successfully circumvents two-factor verification as the two-factor authentication system does not cover iCloud backups or Photo Stream.

Two-factor verification can make it much more difficult for hackers to acquire a user's login credentials in the first place, preventing many attacks, but an iCloud backup can be installed with just a user name and a password.

The ElcomSoft software does not require any credentials to buy and while it costs $399, it is also available on bittorrent sites. The vulnerability in iCloud backups has been known for some time, with ElcomSoft's own CEO pointing towards the lack of two-factor authentication for iCloud backups back in May of 2013.

Apple has explored expanding two-factor authentication to some iCloud services, but an official expansion of the security feature has not yet been introduced.

Santabean2000
It seems there are no end if tricks available to the scumbags out there willing to do hurtful things.

However, bottom line (pun intended) is, if you want nude snaps of yourself, fine, take some, but don't keep them on your phone or in the cloud where they are most vulnerable.

While I have some sympathy for the victims, I also believe ignorance is not really an excuse these days.

People have to accept more responsibility for their actions, even if the consequences are far beyond what they initially imagined. The sad fact is in our cottonwool society is far easier to blame everyone else for everything than accept some responsibility personally. If you don't agree then you're part of the problem.
Score: 17 Votes (Like | Disagree)

mozumder
The ripping process, which has been going on for months: 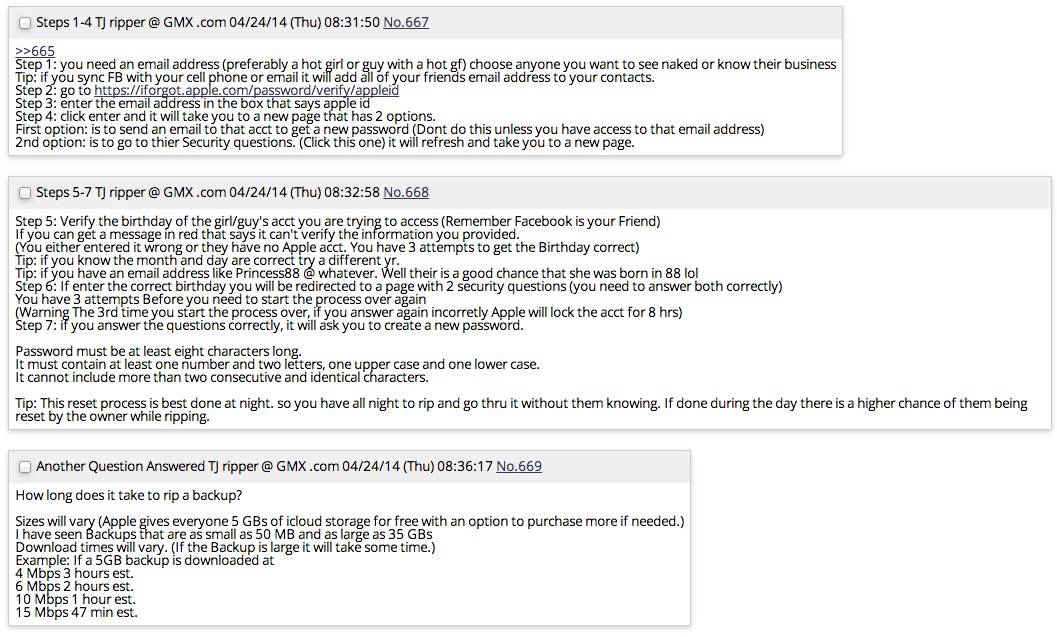 apolloa
I think you need to change the headline for this article, so you are not claiming that someones opinion is fact.

Should be changed to:

jdawgnoonan
If, and that obviously is an IF, that is what happened then Apple should not claim that the images were not stolen due to weaknesses in their security. In fact, this is an even bigger potential hole in their security in my opinion. And to those who want to make it the victims fault that these photos were stolen: You are messed up in the head.
Score: 14 Votes (Like | Disagree)

swingerofbirch
Interesting timing with Apple about to come out with a mobile payments system.
Score: 14 Votes (Like | Disagree)
Read All Comments

Saturday February 4, 2023 10:05 am PST by Eric Slivka
Online retailer TigerDirect has slashed pricing on the M1 iPad Air in several colors, offering the base 64GB configuration for just $313.99 in Purple and Pink. Note: MacRumors is an affiliate partner with TigerDirect. When you click a link and make a purchase, we may receive a small payment, which helps us keep the site running. That's a savings of 48% compared to Apple's normal $599.00...
Read Full Article • 415 comments

Sunday February 5, 2023 6:07 am PST by Joe Rossignol
Apple has discussed selling a new top-of-the-line iPhone alongside the Pro and Pro Max models in 2024 at the earliest, according to Bloomberg's Mark Gurman. Based on this timeframe, the device would be part of the iPhone 16 lineup or later. In a September 2022 edition of his weekly "Power On" newsletter, Gurman said there was "potential" for an iPhone 15 Ultra to replace the iPhone 15 Pro...
Read Full Article • 431 comments